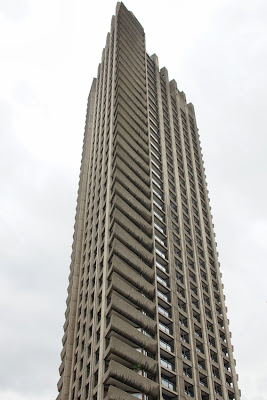 The Barbican is a large complex in the City of London which is home to an arts centre, schools, the Museum of London, and about four thousand residents. It is also well-known for its brutalist architecture and rather disorientating high-walk geography. An architectural tour offers more insight into this development, now Grade II-listed but still disliked by many Londoners. 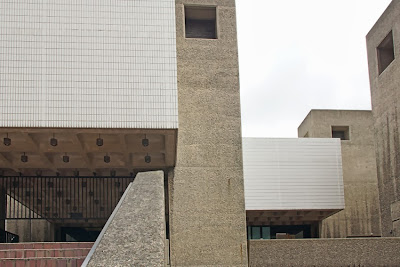 The City of London suffered badly in the Blitz, and Cripplegate ward was particularly badly damaged. Among the historic buildings which did survive were the parish church, St Giles Without Cripplegate, and remains of the city walls - all of which can still be found within the concrete complex. 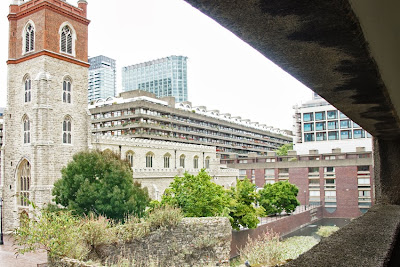 In the 1950s, discussion began on how to redevelop the area; since the population had dropped from over five thousand to 48, residential development was seen as a priority. After winning an architectural competition, Chamberlin, Powell & Bon began work in 1965. 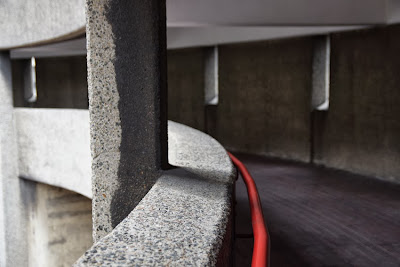 The name of the estate alludes to the fortifications which once stood on part of the site - and that spirit of being fortified and protected from the outer world is fundamental to its architecture. Walk up from its underground car parks, or across the footbridge from Barbican underground station, and you are inside a space which aimed to offer all its residents needed, with its walls protecting them from the noise and activity of the city beyond. There are the homes and cultural amenities, of course, but also a lake, a garden, the arts centre, doctors and dentists, and an area originally intended as a shopping centre. 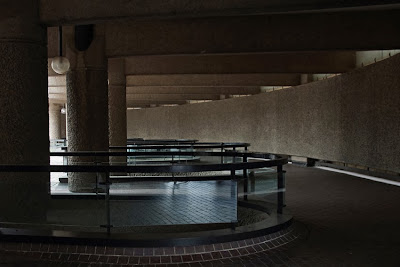 Brutalism is intended to refer not to the brutality of form and colour, but rather to this architectural style's emphasis upon beton brut, or raw concrete. In fact, the apparent rough-and-ready appearance of the concrete is misleading. When poured, it had the smooth surface of the wooden shutters which shaped it. A great deal of work with special hammers was required to give a rough surface which exposed the Welsh granite aggregate within. 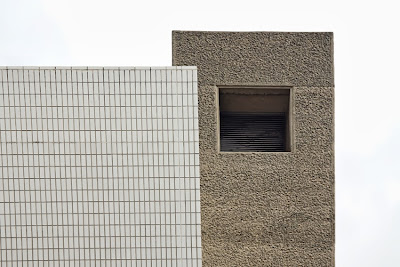 Did this tour persuade me to join the Barbican's admirers? Not altogether, but it does give a better appreciation of how the complex works, why it is more than just another mass of high-rise concrete, and why so many of its residents are very proud to live there. 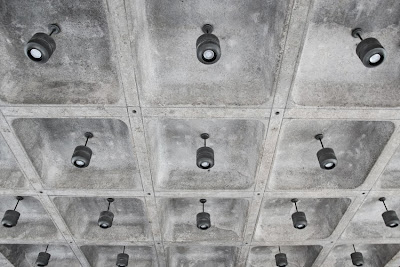 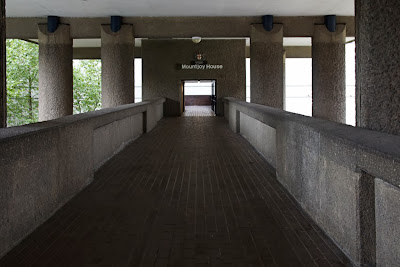 What a contrast - the imperial splendour and eye-pleasing structures and decor of Victorian Britain and the stark functional concrete slabs of futuristic soulless dwellings - all rubbing shoulders in one city. It seems to me that the former was built to celebrate the inhabitants, and the latter to celebrate the architects!

If only the Barbican were functional. Have you ever tried to find your way through it?

Caroline's explanation that the raw look of 'béton brut' actually has to be manufactured with some effort says it all, really. It takes a lot of work to make something look that ugly.

Caroline, When I was at university in the late 1970's my hall of residence overlooked the Barbican. There are parts of it particularly around the lake that I think work quite well. I agree from the outside it can appear to a forbiding block and not easy to approach and find a way in. I will say that the theatre is very comfortable, once you have found it.

I did read that the jack hammers were taken to the concrete because it originally looked so bland, that the surfaces were smashed to give it texture and to make it look more attractive.

It does seem to grow on people! I do find the theatre comfortable, too - once I've found it. Ralph, I'm glad I'm not the only person who finds it rather difficult to navigate through...

A great deal of work with special hammers was required...

And I do so wish they hadn't bothered. What is it with modern "architects" that they have this stupid infatuation with ugliness?

I do have misgivings about the appearance of the Barbican but it is a fascinating place to visit (even if it is hard to find your way around but, then, that's part of the fun...). Have you visited the conservatory?

Even when a building is ugly, I think it becomes interesting as the story is told. I didn't know the Barbican had been listed, though I suppose I'm not so surprised. :)

Linda, part of the reason for the listing is the coherence of the scheme - it's unusual for being so large and complete.

SilverTiger, I've seen the conservatory several times from outside but never been in! (Something else on my very long to-do list.) It was built to conceal the blank wall of the theatre fly-tower from the flats alongside.

Quite a lot of brutalist buildings are "listed" (it's called designation) over here, Stateside, too. As these once-modern styles become older, they become examples of their time. I find it interesting that buildings I saw go up when I was a kid could, theoretically, now start to be listed (I think they have to be 40, and I've surpassed that.)