The opening of the new public square in front of King's Cross Station was accompanied last weekend by a Victorian-style fair and the Journeys Festival, aiming to explore the area's history, in neighbouring Granary Square. 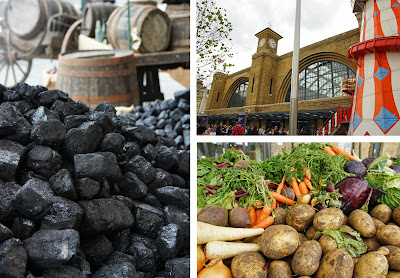 While many of the attractions were rather sanitised (including some of the most aesthetically-pleasing piles of coal I've seen), a boat trip along the Regent's Canal was a real treat - especially as it took us through the Islington Tunnel.

In the early nineteenth century, canals were the latest transport craze (and although they would soon be overtaken by the railway craze, they continued to play a significant role in transporting freight well into the twentieth century). Thus the Regent's Canal was approved by Parliament in 1812, and the company managed - albeit with some difficulty - to raise funds for its construction. The canal opened in 1820 and among the engineering achievements involved was the construction of a tunnel over half a mile long under the streets of Islington. 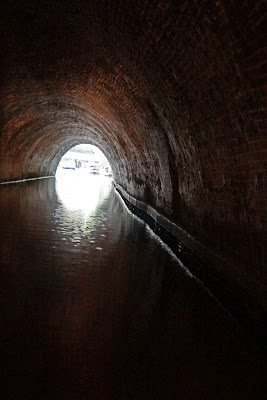 It was quite a feat on the part of the canal's engineer, James Morgan. The construction was done using manual labour, helped only by explosives. Thomas Telford described it as 'materials and workmanship excellent, and its direction perfectly straight'. The fact that it is still in use two centuries later supports his positive assessment. 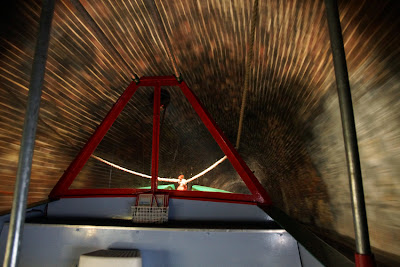 Of course, the disadvantage of a tunnel is that it generally doesn't have a towpath. Unable to have their barges towed along its length by horse, the barge crew had to 'leg' the boat through, lying on their backs and using their legs to push it along the tunnel length. They must have been hugely relieved when an alternative system came into operation in 1826! A steam tug heaved barges on a continuous chain, saving the efforts of their crews. Only in the 1930s was it replaced by a diesel engine, although today's barges are expected to travel through under their own power.

The tunnel has arguably increased in status in recent decades. Once the third-longest canal tunnel in the south-east, it is now the longest left in use. In former first place was Strood Tunnel, since converted into a railway tunnel, while the second-placed Greywell Tunnel closed in 1932. 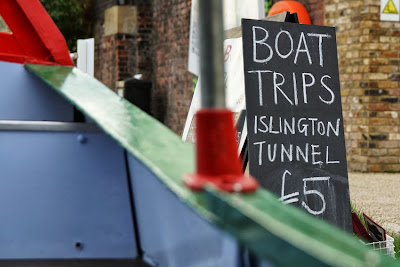 The Regent's Canal has two substantial tunnels apart from the tiny one under Lisson Grove, which has a towpath inside and resembles a bridge. The other tunnel is the Maida Hill Tunnel, which goes under Maida Vale and some distance to the east before the canal emerges to the light. Both this and the Islington Tunnel tunnel are the work of James Morgan.

He did the shorter Maida Hill Tunnel first; not an easy job as the digging uncovered an underground spring, and several workmen were killed. There is a plaque on the towpath at the east end of this tunnel, which says that Morgan had never built a tunnel before. But it is a perfectly good one and has lasted two centuries.

This page on Morgan
http://www.canalmuseum.org.uk/history/morgan.htm
says that he had never built a canal either until he took on the Regent's Canal project. What a task to be catapulted into, and how well he did.

Of course, one of the joys of Maida Hill Tunnel is that it wasn't planned as part of the original route, but had to be added following local landowners' objections. However, it worked out well as the spoil helped to level out Lord's Cricket Ground!

You've stolen a march on me there as I have often gazed wistfully into the Islington Tunnel (from both ends) promising myself a ride through it one of these days. So far, that day has not arrived.

When it does, I think I shall be quite nervous - thinking of the weight of earth, streets and buildings above us!

I'd definitely recommend it - and managed not to think too much about what was above us!