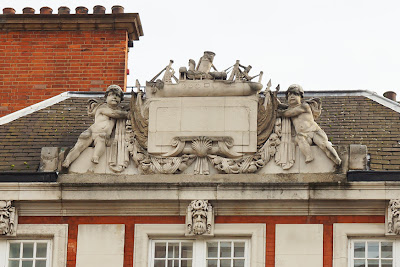 There would be some mileage in a study of incongruous objects in London statuary. The Albert Memorial springs to mind, with its stone steam engine and Winchester carbine, not to mention its life-size buffalo, elephant and camel. The pediment of the former Great Western Hotel in Praed Street has a wonderful assortment including a cogwheel, a screw press, a goat, another camel, another elephant, a beehive and an anchor.

That would be a lovely project!

What a jaunty looking little steamboat - shame it's stuck up on top of a building, you can't really appreciate it up there!

The steamship is great fun, as HughB says a pity it is up on the roofline.

Do you know what the Bennett Steamship company carried, Goole, London and Boulogne is an interesting group of destinations.

I was born in Goole, into a merchant navy/railway family, and I must have gone past that building in Tooley Street thousands of times without knowing of its connection with my birthplace. Wonderful to know -- thank you!

The putti are far too big in relation to the steam ship which should have been the key feature of the ornamentation. Especially as Hugh says... that a pedestrian on the street below cannot fully appreciate the work.

Alan, what a nice connection!

The ship is rather inconspicuous - I managed to walk past it many, many times without realising it was there. I wonder whether it was the company, the architect or the artist who decided that this acknowledgement of the building's business should be so discreet?

Anon, I'm not entirely sure what the ships carried but they offered connections from Boulogne to Italy. They seem to have started with the Goole - Boulogne route, and added London later.