William Ewart Gladstone, four times prime minister, is known for his championing of Irish Home Rule, his rivalry with Benjamin Disraeli, his enthusiasm for cutting down trees, and his evangelical Christianity. The latter famously inspired his mission to reform London prostitutes, going out on the streets to talk to them and offer them accommodation, medical treatment and employment. (This attracted a great deal of almost certainly unjustified scepticism, although he did admit that part of the purpose of this work was to put himself in the way of temptation and resist it.)

However, William and his wife Catherine Glynne Gladstone also engaged in another philanthropic act which is less colourful and therefore less well-known. It also connects the capital with a small village in North Wales, just a few miles from Chester.

As a regular visitor to the London Hospital, Whitechapel, Catherine saw at first hand the effects of the 1860s cholera epidemics on the East End poor. She founded an orphanage for the children of cholera victims, in a large house in Clapton. It also took in convalescent patients, and the convalescent home later moved to Woodford Hall, Essex, in 1866. Adults and children were sent here from the London Hospital in the East End to recover from illness or surgery. The home moved to Mitcham in 1900, eventually closing in 1940.

As for the orphaned boys, Catherine sent them from Clapton to a new orphanage in the Gladstones' home village of Hawarden. Initially, she took a dozen boys from London to the village and accommodated them in a former coach house; Gladstone paid for their keep. (The couple also accommodated unemployed Lancashire mill girls and elderly women on their estate.) The orphanage continued for many years, and seems to have taken in other children in need of a home. A guide to the village of 1890 describes it as housing twenty to thirty boys and being 'hard by the Castle [the Gladstones' home] and across the yard'. 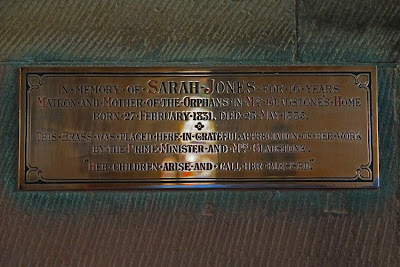 A plaque in the village church commemorates Sarah Jones, who was 'for 16 years Matron and Mother of the Orphans in Mrs Gladstone's Home'. Since she died in 1885, she must have worked at the orphanage for a significant part of its existence.

I was delighted to read your article about Gladstone's little orphanage, as my grandfather and his brother were cared for there after the death of their father. They were initially accepted due to the intervention of their aunt, who was housekeeper to the Earl of Lonsdale at Lowther Castle. I imagine Lord Lonsdale sponsored them.
My grandfather said the boys were kindly treated and he was happy there. When Gladstone visited occasionally, he would bring a little portrait of one of his grand-daughters and the boys were required to admire her and agree that she was a very pretty little girl!
When my grandfather left the orphanage, he was given a job as a page at 10 Downing Street. I think it was arranged that most or all of the boys were put into domestic service with good families, as my grandfather's younger brother was employed by an MP.