Among London myths, 'built on a plague pit' is perennially popular. The Charterhouse has a better claim than many, at least to being built beside one: Charterhouse Square was originally a 14th-century burial ground for victims of the Black Death. Part of the land, unused for burials, later became the site of a Carthusian monastery, founded in 1371 by Sir Walter de Mauny. 'Charterhouse' is a corruption of 'La Grande Chartreuse', the order's mother house.


When Henry VIII dissolved England's monasteries, some of the monks were executed for refusing to conform to the Act of Supremacy; others starved to death in Newgate Prison; while the Charterhouse was converted into a private house. The Duke of Norfolk bought and further altered it. Finally, in 1558, it took on a new role - one it still performs four centuries later.

Thomas Sutton was apparently the wealthiest commoner in the country, having made his fortune in money-lending, coal mines and munitions. He used his wealth to found a charity which was to provide housing for 80 men and schooling for 40 boys. Originally the site was to be outside London, but the Duke of Norfolk's son was selling Charterhouse to build a new home at Audley End, and Sutton bought it from him. When he died in 1611, most of his fortune was bequeathed to the charity - so it's no surprise that his heirs contested the will. However, with the Archbishop of Canterbury and the Lord Chancellor among the charity's governors, Sutton's wishes were carried out. While the school moved to Surrey in the nineteenth century, having grown far beyond forty pupils, the almshouses are still thriving on the original site. (Officially, it is still called Sutton's Hospital.) 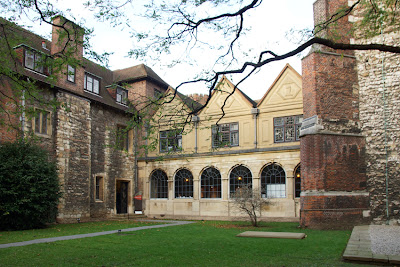 The result of this history is that the Charterhouse is a charming mixture of eras and materials - mediaeval stone, tudor brick, seventeenth-century wood panelling.

Before they moved out of central London, the boys of Charterhouse School would play football in the Norfolk Cloister. Apparently the rules of football, notably throw-ins and the offside rule, were first developed here.

Because it's still home to a number of 'brothers', the Charterhouse is usually closed to the public. However, it opened its doors last month for an exhibition on Philanthropy in the City of London. (In fact, the Charterhouse is just outside the City, but only by a step or two!) Although the exhibition has now finished - I only made it on the last day - the guided tours will resume in January and can be booked. 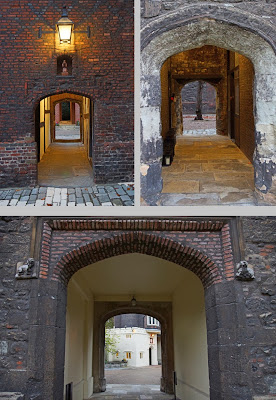 The Londonphile and Londonist have also visited.

Purists always prefer to have all the architecture within one home or public institution to belong to the one era, particular the era in which it was originally built. But Charterhouse is indeed a charming mixture of eras and materials.

In the Tudor Great Hall, does the photo show a space for minstrels or musicians above the diners below? Very civilised, I call it.

It's wonderful to find this in Lindon. It has such a calming gravitas. I was lucky enough to visit when doing some filming there - when it stood in for a country house in Herefordshire!

Hels, yes, there is a gallery around two sides - very nice!

Essie, how lovely; what was being filmed?