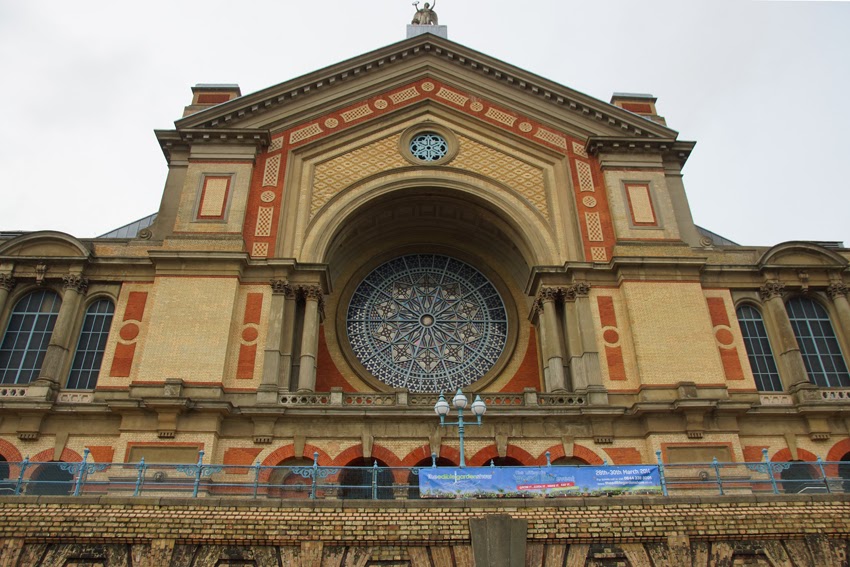 After the Great Exhibition of 1851, its Crystal Palace moved to Sydenham and offered Londoners all sorts of educational and entertaining activities. It wasn't long before North Londoners asked why they couldn't have their own palace; the answer was Alexandra Palace, which opened in 1873. It too was set in a park; it too had its own railway station which led visitors directly into the main entrance; it too was built using a former exhibition building (from the 1862 International Exhibition in South Kensington); it too offered a wide range of activities, from concerts to sporting competitions; and it too was known as a Palace for the People.  (Indeed, that was to be its official name until the owners were overtaken with enthusiasm for the new Princess of Wales, Alexandra.)

Like its elder sibling in South London, Alexandra Palace has a history marked by fire. In fact, Ally Pally was accidentally set ablaze after being open just 16 days. Its site on top of a hill made getting water to fight the fire difficult, and it burned beyond repair. However, its initial popularity and a substantial insurance payment persuaded the owners to rebuild to a new design. Among the key changes was the addition of towers, each holding water tanks, so that future fires would not be so destructive. Unfortunately, when fire struck again in 1980, the tanks were empty. 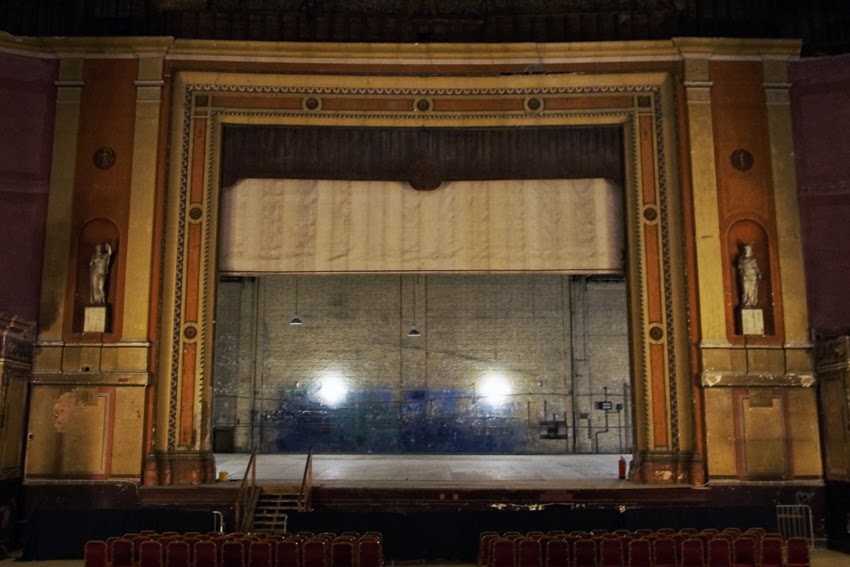 The second incarnation of the Palace opened in 1875, and offered facilities on a grand scale. Among these was a theatre, as large as its West End counterparts and also used as an early cinema - and which still survives. Much of the original stage machinery remains, and there are hopes of restoring the venue - without losing its faded grandeur - if a bid to the National Lottery is successful. 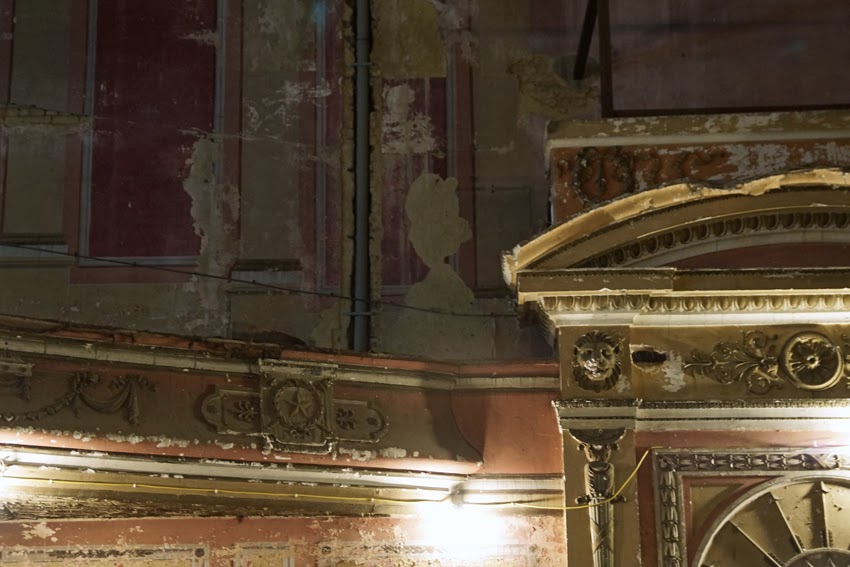 The Great Hall houses the Willis organ, one of the great features of the Palace and originally built by the great Victorian organ builder 'Father' Henry Willis. One of the very finest surviving concert organs, it is a vast machine originally powered by two steam engines - and with five keyboards, challenging to play. Despite suffering badly over the course of the twentieth century, including damage from the 1980 fire, and still needing further restoration, it continues to be played. 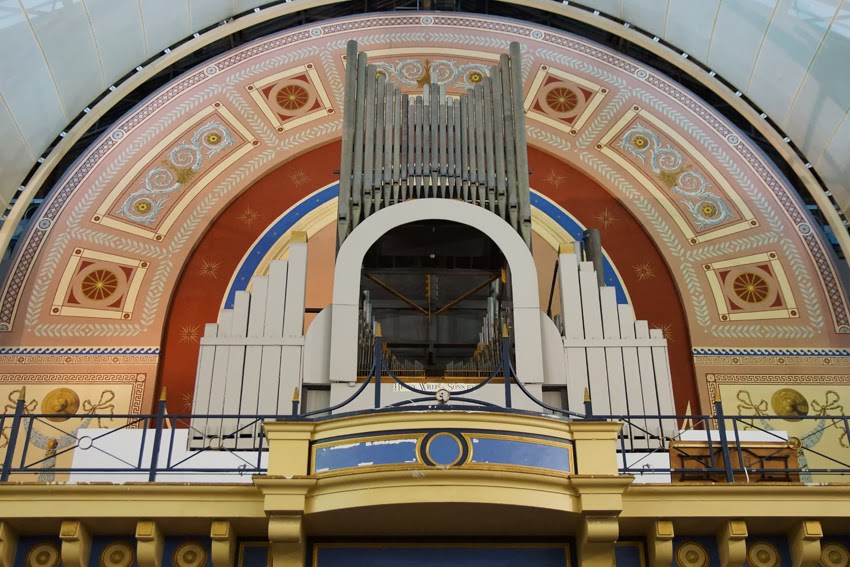 The railway station serving the Palace has gone (although there is now another of the same name, rather further from the building). However, the footbridge from the former station building to the Palace remains. 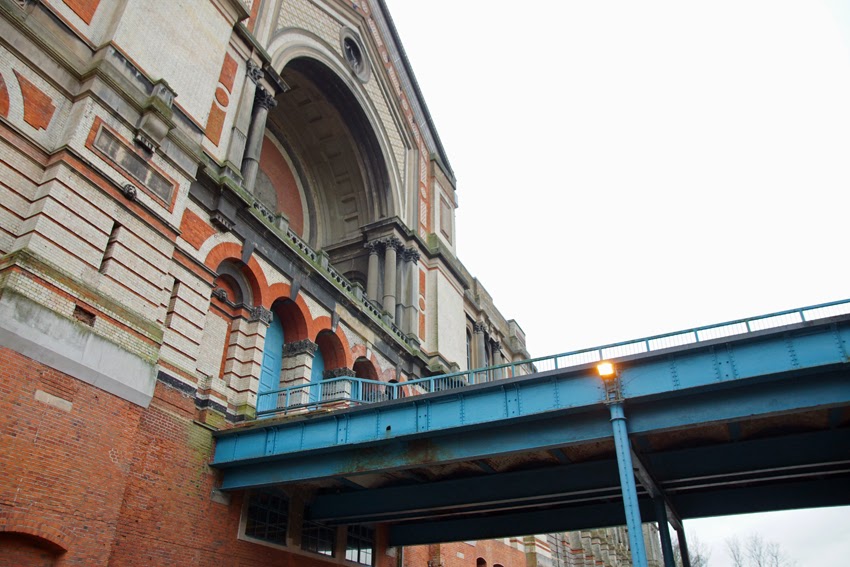 Despite its many attractions, Ally Pally always struggled financially. At the end of the nineteenth century, a proposal to turn the site into building plots was defeated by moving the Palace and Park into public ownership, but the financial problems continued. It was perhaps at its lowest ebb when a very significant decision changed its future: the BBC was looking for a site from which to broadcast television programmes. It had to be sufficiently high for the transmitter, and close enough to central London to make the most of the limited broadcasting range at that time. Alexandra Palace was ideal.

The first public television broadcasts were transmitted by the BBC in 1936. Later, the first outside broadcast (on the terrace) and the first news broadcast would also be made from here; it would go on to be the first home of the Open University. The fame of Alexandra Palace was secured far beyond its London constituency. 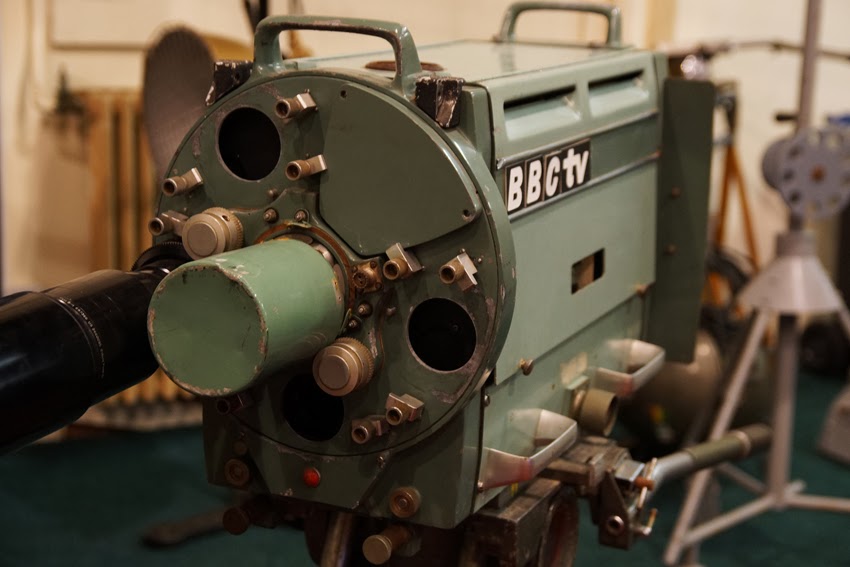 Today, the BBC is gone, but Alexandra Palace remains a popular venue for concerts, exhibitions, fairs and other events. There is also a busy ice rink, and several cafes and bars. However, much of the building is closed to the public - the theatre, for example, is currently accessible on special tours only - although it is hoped that Lottery funding may allow the theatre and a television museum to be opened in the future. Also currently closed - and not even included on the recent history tours - are the basements, which still retain beds and other evidence of the Palace's use as an internment camp for German civilians during the First World War. There are hopes of allowing visits to these later in the year to commemorate the World War One centenary.

I love the connection with the International Exhibition of 1862; I'd forgotten about that completely. And I love your internal photos, especially of the theatre.

Thank you, and I enjoyed your article too.