The logo looks like a cross between a deer and a dog, and the product name is obscured, so it wasn't easy to identify the brand being advertised in this sign from Noyal, Brittany. Nonetheless, commenter Ralph Hancock recognised it as a foal, the symbol of Poulain. 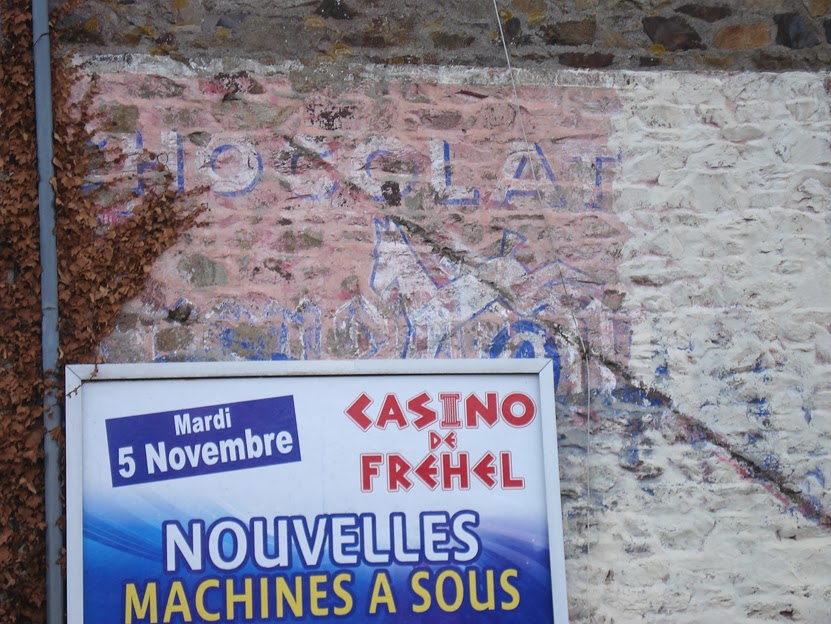 This chocolate company was founded by Victor-Auguste Poulain. He was a pioneer in mass-producing the confectionery, starting his company in 1848 - a year now immortalised as one of Poulain's product lines - and opening a factory in 1862. He transformed chocolate into a popular product, rather than a luxury - and from a health food to a sweet treat.

Poulain excelled at marketing. For example, in 1865 it launched one of the first national poster campaigns. From 1890, each wrapper contained not only chocolate but also a picture. Children would collect the image cards, on themes ranging from 'Around the World in 80 Days' to insects to tennis. They disappeared from packets in the 1990s, only to reappear in 2011. More drastically, the company began acquiring cinemas in 1907; some bars of chocolate came with vouchers for half-price tickets.

The company passed from father to son Albert in 1880; when his own son made it clear that he didn't plan to take over the business, Albert sold his majority share. That created a slight dilemma for the new proprietors: the chocolate had hitherto carried the owner's signature or name, but Poulain was no longer the owner. The answer: the famous foal logo, which became the brand's symbol from 1911.

Today, Poulain chocolate is owned by Cadbury Schweppes. Its name and logo live on, a familiar brand throughout France. The particular stylised version which inspired our sign seems to have been a short-lived variation, but the dog-like head and antenna-style tail here are, as far as I can discover, the signwriter's own, unique contribution!