The huge Crossrail project, which is digging up or under much of London in order to create a high-frequency, east-west railway, has reached its halfway point. To celebrate this landmark, several stations opened to the public recently. I took the opportunity to view the construction at Woolwich Arsenal. 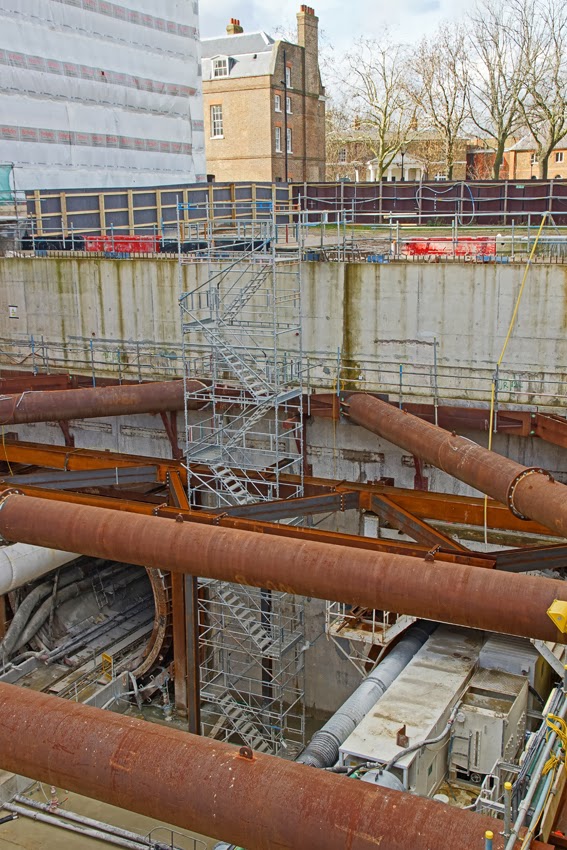 It was a chance to see the development effectively in cross-section: a view which will disappear when the station gets its roof. Below ground level, the tunnels can be seen - and the back of Tunnel Boring Machine Mary. A concrete slab will cover the station at ground level and provide a base for a building above. It will sit among the historic Arsenal buildings, still visible in our picture.

The geology of the area - chalk, flint, and wet ground - means that the TBMs are not, like the majority, earth pressure balance machines. Instead, they are slurry machines: the cutter head has a pressurised chamber, with a pipe feeding in bentonite (a clay and water mixture) to support the excavation face. Another pipe carries out the soggy spoil (in contrast, the pressure balance machines transport spoil back using a conveyor system). The 'slurry' is then treated in Plumstead, where it is separated out into sand, gravel, water, and 'cakes' of chalk.

Seeing all this activity, and the advanced stage of the work, it is easy to forget that the station had a precarious start. Not part of the original Crossrail scheme, it was only added when Berkeley Homes agreed to build the station box as part of their development of the site. However, uncertainty remained until funding was agreed to fit out the station in July last year.