Blackfriars Railway Station reopened in 2012 after major rebuilding work. Among other changes, the platforms now run the full length of the bridge over the Thames, and incorporate some of the disused piers from an earlier dismantled bridge. Their roof is covered with over 4,000 solar panels which provide up to half the station's energy. Spacious new ticket halls inevitably make lavish use of glass. 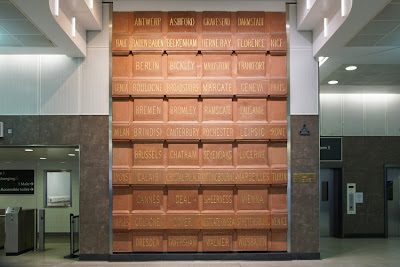 Among all the shiny newness, though, is a large and dramatic piece of the past. This list of destinations is somewhat misleading if consulted by today's travellers! 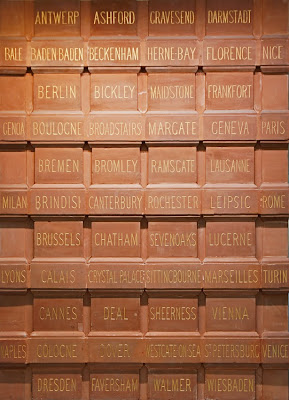 Its order is also a little puzzling at first sight; in fact, the left and right columns list international destinations in alphabetical order, while the centre columns give an alphabetical list of British destinations. As a discussion on the always-informative London Reconnections confirms, they were not originally a single 'wall' and did formerly stand as two columns on either side of the station entrance.
- May 20, 2015