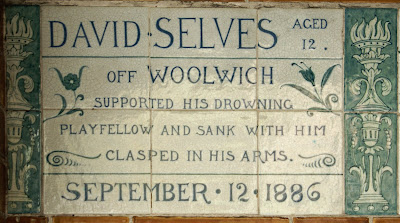 The Watts Monument tells the story of young David Selves's death briefly and simply:
DAVID SELVES AGED 12, OFF WOOLWICH SUPPORTED HIS DROWNING PLAYFELLOW AND SANK WITH HIM CLASPED IN HIS ARMS, SEPTEMBER 12 1886.

However, there is another tragic aspect to David's story. He was the youngest of eleven children born to George and Emma Selves. His elder brother Arthur had already died from drowning in nearby Plumstead eight years earlier, at the age of 14. The inquest verdict was 'accidental death while bathing'.