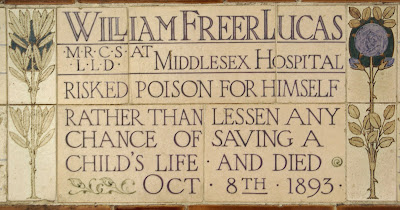 
However, Lucas's early promise was cut short by his death from diphtheria. Today, most of us have been vaccinated against this highly-infectious disease which is spread primarily by coughs and sneezes. It can also be treated by antibiotics. With neither vaccination nor antibiotic treatment available in the nineteenth century, though, the disease was a frequent killer. In severe cases, a grey-white film would develop in the throat and block the airway, and an operation to relieve breathing was the only treatment.


It was just such a severe case that Lucas treated in 1893. While he was administering chloroform during a tracheotomy operation on a child with diphtheria, the patient coughed into his face. Lucas nonetheless proceeded with the operation. Four days later, he too had diphtheria which killed him within 10 days.


Lucas's memorial service (held at the hospital chapel, almost all that now survives of the Middlesex Hospital buidlings) and his burial were well attended by his medical colleagues. The BMJ published a memorial poem written by 'one who was well acquainted with Mr Lucas'; since it is in Latin, I won't reproduce it here. The Freer Lucas Scholarship for medical students at Middlesex Hospital was also endowed by his parents a few years later.

His plaque on the Watts Memorial states:


WILLIAM FREER LUCAS MRCS LLD AT MIDDLESEX HOSPITAL RISKED POISON FOR HIMSELF RATHER THAN LESSEN ANY CHANCE OF SAVING A CHILD'S LIFE AND DIED OCT 8TH 1893.

Can the Latin poem be found on the web?

Yes, it can, here. In fact, I'll add the link into the text.

Thanks. Interesting to see that it's not the usual classical ode but early medieval in form, probably intended to be sung to the tune of Lauda Sion salvatorem.

A tree in fine leaf,
fragrant with new blossoms,
passes before its time.
The vessel scarcely out of port
through the sudden force of the storm
is sunk by the waves.

And you, with great pain,
We mourn in the flower of your age,
lovable in your ways,
seized by bitter fate,
snatched away from our eyes
but living on in our hearts.

Alas! energetic youth,
a life full of work,
bright intelligence,
perish without fruit;
nothing comes from his qualities,
nor from the love of his fellows.

Do not utter unfitting words:
life is not in vain
if somone has lived it well.
Always using his talents well,
bringing help to others,
he met a beautiful death.

He who thus left his life
fell asleep full of faith;
he will not die completely.
The vessel finds safe harbour,
into the heavenly garden the tree
is transplanted and is fruitful.