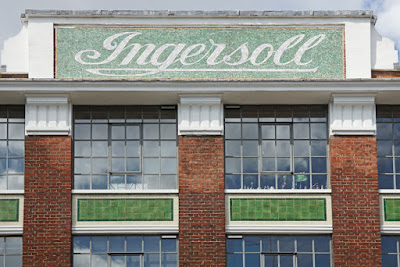 The name of Ingersoll stands out in fine mosaic on top of a building in St John Street. While the company has left, its former showroom and factory is a glorious reminder of the past. 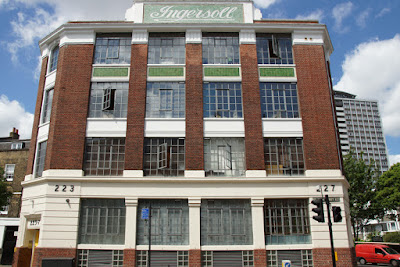 The building was designed by Stanley Waghorne in the 1930s, apparently as a speculative development, although Ingersoll soon put their mark on it. Having made their name in the United States with one-dollar pocket watches, the company was soon exporting large numbers to Simonds, a London department store. When Simonds closed, Ingersoll opened their own shop in London in 1904. (They priced the watches at the sterling equivalent to a dollar, five shillings: thus it was known as the Crown watch.) They were successful enough to start manufacturing too, and had their factory and showroom here until the Second World War, when they moved out of the city. The building continued in industrial use until it was converted into flats in 1995; in the 1950s, it was the Vogue pattern factory.

Surprised to find that you can still buy an Ingersoll watch, though only a wristwatch and not the big 'Crown' pocket watch. Also, you can still get a mechanical one, though the cheaper models are quartz. The company is now Chinese-owned and the watches are made in China, but they still have that big curly name on the dial, as imperishable as the Coca-Cola logo.

How wonderful. I've not seen this building, and you have had me doing much pleasurable fiddling about on Google Earth to find it! I'll try and head north that way next time I visit my son in the more northerly reaches of Islington. Thank you.