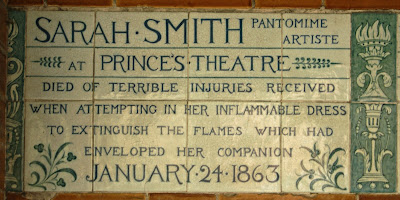 Search for more information about the death of Sarah Smith at the Prince's Theatre, and you'll reach a dead end very quickly. Thanks to the Newspaper Library, I found the answer to the mystery: her plaque contains a rare error. It reads:

SARAH SMITH PANTOMIME ARTISTE AT PRINCE'S THEATRE DIED OF TERRIBLE INJURIES RECEIVED WHEN ATTEMPTING IN HER INFLAMMABLE DRESS TO EXTINGUISH THE FLAMES WHICH HAD ENVELOPED HER COMPANION, JANUARY 24 1863.

The mistake? Sarah Smith actually died at the Princess's Theatre. However, there is also a more fundamental question as to whether the other details of her story are true.

The Princess's Theatre on Oxford Street was known for its opera, drama and latterly melodrama. It was no 'penny gaff': in 1865, Cruchley's London gave seat prices ranging from 2l 12s 6d for a private box to one shilling for a seat in the gallery. Dion Boucicault, Charles Kean and the young Ellen Terry had all worked here and although Kean's revival of Shakespeare had ended a few years earlier, the theatre was still remembered for his productions. However, in the winter of 1863 it had a more seasonal show in place: a pantomime.

Victorian pantomime offered a full evening's entertainment - as much as five hours - so the main performance was padded out with features such as ballets. Choruses commonly had as many as 30 members, including child and adult dancers. The incident of 24 January centred on one such ballet. For it, the stage was lit by 'tin pans', red and green lights; these apparently did not spark or sputter, but nonetheless set fire to the outfit of the dancer Mrs Hunt as she performed. The theatre's lighting expert suggested that the fire was caused by sparks from the match used to light the pans.

According to a witness at the inquest, Hunt ran to the side of the stage where she passed Smith, setting her on fire too. Smith - also a ballet dancer - was wearing numerous skirts, and the ballet manager didn't know whether the outer skirt had been fire-proofed. Standard fire equipment such as damp blankets should have been provided but was not available, although a fire hose was. Robert Roxby, stage manager, used his Inverness cape to put out the flames on first Hunt and then Smith.

Mrs Hunt survived her injuries, albeit scarred for life and unlikely to return to her previous career. However, Sarah Smith was not even that fortunate. She suffered burns to one-third of her body including her face, neck, back, front, chest and arms, and died in the Middlesex Hospital of 'exhaustion caused by burns'. Her funeral, paid for by the theatre lessee Mr Lindus, saw 'some demonstration of sympathy on the part of the theatrical fraternity as well as of the general public.' She was buried in Nunhead Cemetery.

The jury verdict was of accidental death, and they added a resolution that 'sufficient precautions were not taken at the Princess's Theatre to extinguish any accidental fire of the clothes of the corps de ballet. They also strongly urge the necessity of rendering articles of linen and cotton clothes fireproof by the manufacturer and the laundress.'

Throughout the inquiry, there was no suggestion that Smith caught fire while trying to save her colleague. Why, then, was Watts sure that this is what had happened? The mystery remains - although as he generally relied on newspaper accounts to select 'ordinary heroes', presumably there was a report somewhere which told the more romantic version recorded in Postman's Park. Whatever the truth of the matter, Smith's story is certainly a tragic one and a vivid illustration of the omnipresent threat of fire in the Victorian theatre.

The death appears to have had little effect on the Princess's Theatre, which remained in business for many more decades. Rebuilt in 1880, it was finally demolished in 1931 to make way for a Woolworth's store; more recently, it was home to HMV.
- June 07, 2015

Interesting use of the term 'tin pans', which I hadn't heard before. This must be where 'Tin Pan Alley' comes from - a street lit by stage lights. But Wikipedia offers two alternative suggestions, without mentioning the lights: http://en.wikipedia.org/wiki/Tin_Pan_Alley -- and the OED also supports the Wikipedia suggestion, that a tin pan is a tinny sounding piano.