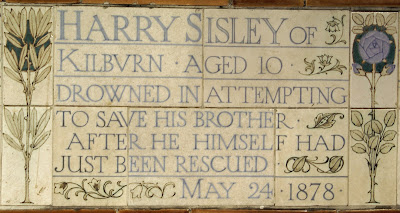 In mid-Victorian Britain, swimming became a popular leisure activity. Outdoor swimming pools began to appear, including the marvellous Thames Lido. However, with entry a shilling, the Lido was less appealing to many than the ponds, rivers and canals of London.

Unfortunately, swimming in open water poses greater dangers than bathing in a pool, and there is a generous scattering of drowning accidents on the Watts Memorial. I've already considered the tragic stories of David Selves who died in the Thames like his brother before him; John Clinton, swept fatally under a pier; and Alexander Stuart Brown who caught pneumonia after rescuing someone drowning at sea.

Yet another such tragedy occurred in May 1878:

Hence the description in Postman's Park:

HARRY SISLEY OF KILBURN, AGED 10, DROWNED IN ATTEMPTING TO SAVE HIS BROTHER AFTER HE HIMSELF HAD JUST BEEN RESCUED, MAY 24 1878.