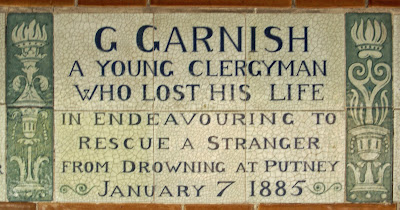 If swimming in the Thames was dangerous, boating also posed real risks. In January 1885, two boats collided on the river at Putney. The five men in the smaller boat fell into the river; unfortunately one of them, an E Mackenzie, was unable to swim. The Rev Garnish was in the larger boat, but jumped into the water to rescue the drowing Mackenzie. Unfortunately, in his panic Mackenzie dragged his rescuer under the water and both were drowned.


Garnish was a recently-ordained curate. Sadly, his first name was unreported both in the press and on the Watts Memorial:


G GARNISH, A YOUNG CLERGYMAN WHO LOST HIS LIFE IN ENDEAVOURING TO RESCUE A STRANGER FROM DROWNING AT PUTNEY, JANUARY 7 1885.


I have talked with a lifeguard and apparently, at times it is necessary to punch out the person in the water in order to save them Otherwise, you might both drown.
I really love the posts that you share here about real people who have been honoured at Postman's Park.

The method I was taught was to offer your wrists to the panicking person, holding them up in front of you as if you were praying (which you probably were): you could then break the struggler's grip with a sudden strong downward and outward movement, grab and spin their body around so their back was towards you, and execute a leisurely stroke to the shore with your arm around their chest supporting their chin above the water. That was the theory, anyway. In practice, the water at Surbiton Lagoon was so cold that January that I had to ask for a smaller lighter volunteer as I was shivering so much I couldn't support myself!