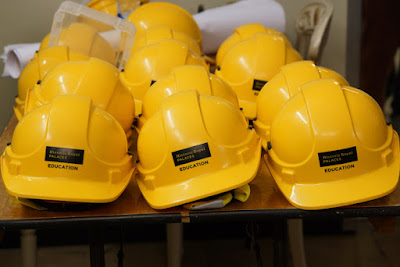 The Banqueting House is currently hidden behind scaffolding, thanks to restoration works - but what's happening behind the hoardings? I got the chance to find out on a scaffold tour which saw me climb to the level of the building's rooftop. 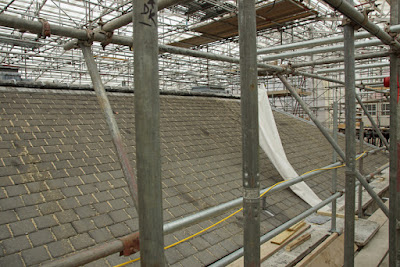 Built in 1619-1622 by Inigo Jones, the Banqueting House was a Palladian addition to the Palace of Whitehall - and almost the only part of the palace to survive a devastating fire in 1698. As a result, the royal court moved to St James; the building became a chapel and then a military museum, before reverting to use for state occasions; and today it is surrounded not by royal residences but by government buildings. 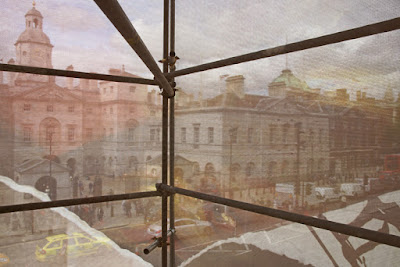 Being four centuries old, the building needs careful treatment, and at the moment its roof and facades are undergoing conservation. The stone is being carefully cleaned and spots of damage repaired; leadwork is being replaced. Given that much of the work is being done very close to the House's most famous (and flammable) feature, its Rubens ceiling, careful rules against 'hot work' are in place to minimise fire risks. 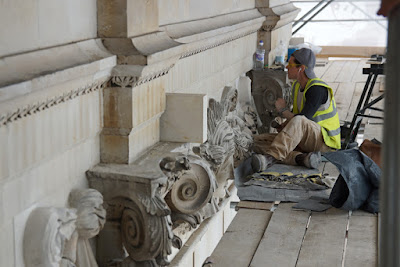 Much of the work is done off-site, with pieces shaped before being brought up the scaffolding and fitted into place. That means there's plenty of activity at ground level. 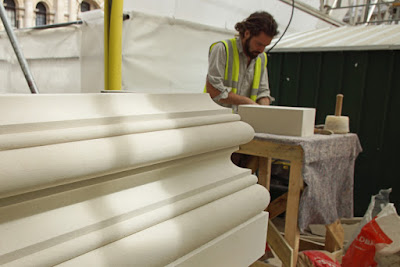 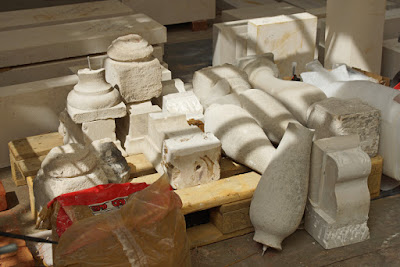 Climbing up nine levels of scaffolding may be disconcerting, but it allows you to get close to details usually only seen from a distance. 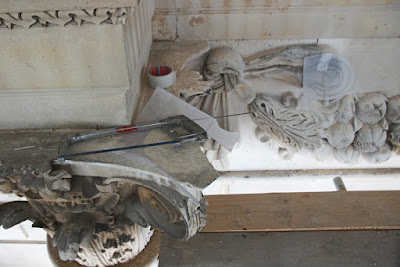 Further down, scaffolding once more stands on the spot where the execution scaffold for Charles I was erected. It is therefore possible to stand on the spot of his beheading and look across to its commemoration on the clock opposite: a black spot marking 2pm, the time of his death. 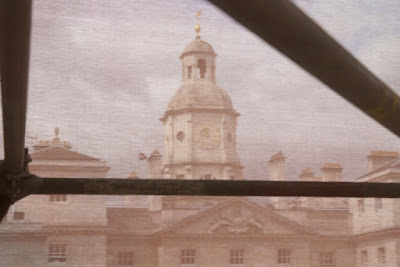 I visited on an event for members of Historic Royal Palaces.

Replacing lead without 'hot work' must be extraordinarily difficult. Did you see how they're doing it?

No - but apparently it involves shaping everything elsewhere so it only has to be slotted in place on the roof.