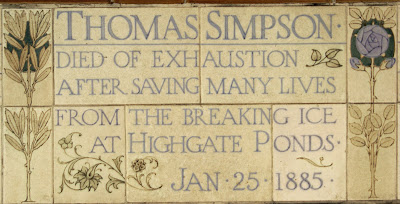 In January 1885, Highgate Ponds had frozen over, making them appear perfect for skating. At 5pm on a Sunday evening, twilight may have been hovering but there were still about 200 people skating on the second pond. So far, it conjures up a picture from an old-fashioned biscuit tin lid: young ladies in ankle-length skirts decorously gliding across the ice, escorted by young men in formal hats. However, since it ended with a memorial plaque, we can guess what happened next...

The ice cracked, and a large portion gave way, plunging some people into the freezing-cold water. While tragedy was not averted, many lives were certainly served by others' rescue efforts. Above all, Thomas Simpson rescued several people. He wasn't an ice skater himself, but a farm labourer of about fifty whose employer Mr Ward rented the pond fields. He got into the water to bring one young man out - a difficult and exhausting rescue. However, when Simpson stooped down to rescue yet another stranded skater, the ice he was standing on gave way; this, combined with the cold and physical strain he had already undergone, meant that he was soon sinking. Although he was pulled from the water, he died very soon afterwards.


The inquest jury reached a verdict of accidental death. They also made two recommendations: first, that 'the Royal Humane Society should be respectfully requested to consider the subject with a view to establishing their life-saving apparatus and drags'; and second, that 'some authorized person should be stationed at the ponds, when ice was on the water, to protect the public from danger.'

THOMAS SIMPSON DIED OF EXHAUSTION AFTER SAVING MANY LIVES FROM THE BREAKING ICE AT HIGHGATE PONDS, JAN 25 1885.