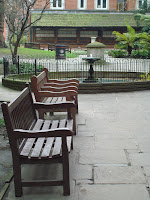 As L. P. Hartley said; "The past is a foreign country, they do things differently there". A hero can only be judged by the people of his/her time in an environment and populace that share the same views, ethics and morals. We sadly have moved away from this time so quickly we are still coming to terms with how to define a British person. Latter day heroes for me would be those passengers who saved the lives of their fellow passengers during 7/7, or the cab driver who drove a woman home after attending the memorial at St. Paul's Cathedral free of charge; however these people are alive and have no place in Postman's Park. Sadly those who killed themselves in the act of murder during 7/7 may in the eyes of some be seen as heroes. Not for me to judge but new plaques would require new lessons in walking on eggshells. Sadly.
Love the blog by the way