The Lansbury Estate in Poplar was designed both as a place to live and as an exhibit in the 1951 Festival of Britain. After the bombing damage of the Second World War, housing was of enormous importance. Thus the Lansbury was to offer a model of contemporary architecture at a moment when neighbourhoods rather than 'icons' were an architectural priority. 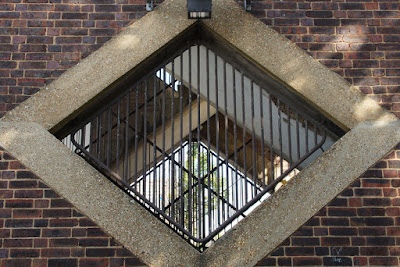 It was serving a very real need: Poplar had been badly bombed, and reconstruction was urgently required. The 1943 County of London Plan emphasised the importance of preserving community identities, including through the creation of community spaces.

Architect Frederick Gibberd was heavily involved in the planning of new towns and neighbourhoods (he would both design and live in Harlow New Town), and had a reputation for delivering good-quality social housing. He argued that the Living Architecture Exhibition should 'take a bombed or cleared site of four to six acres as near as possible to the site of the main Exhibition; to develop it as a cross section of a Neighbourhood, with such other additional permanent structures as may be necessary to complete the visual picture, providing such buildings are of ultimate use to the neighbourhood'. The site would be handed over to the local authority once the Festival ended. 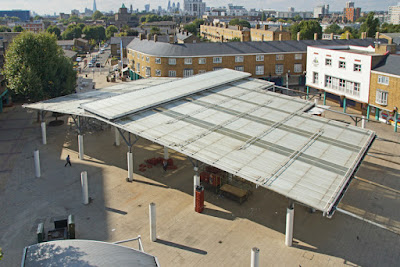 Of various sites suggested, this one was chosen because it was a bomb site; the surrounding buildings were felt to be more attractive than those of other suggested sites; plans were not too advanced; and visitors could travel to it by riverbus. It was to include not only housing but also a market and pedestrianised shopping centre, schools, churches and pubs. Such an ambitious project inevitably suffered difficulties of time and budget: land had to be acquired, residents moved, skilled workers recruited, and permissions obtained. Amazingly, however, the exhibit was completed more-or-less on time and the first tenants moved in on 14 February 1951.

Many of the exhibits were temporary: a 200-foot tall construction crane, the Rosie Lee Cafe, and themed pavilions. Once these had been toured, visitors were sent to walk an approved route around the Lansbury - although unfortunately, it proved easy for them to get lost! Indeed, the Living Architecture Exhibition had something of a Cinderella status within the Festival. There were no opening or closing ceremonies, and the 86,000 visitors were a tiny proportion of the 8.5 million who visited the South Bank. Many critics found the designs uninspiring (reduced budgets hadn't helped), although those who lived there would go on to assess it more positively. 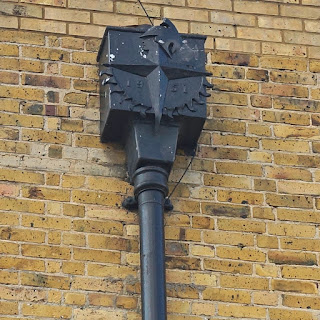 Nonetheless, surviving traces add rather jaunty notes to the estate. Drainpipe hoppers have the festival logo, and there is a Festival Inn. 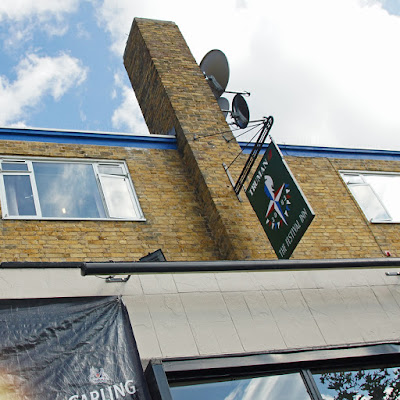 Perhaps the most distinctive manifestation of Gibberd's vision is the landmark Chrisp Street Market clocktower. It was designed as a folly, an enjoyable centrepiece rather than a terribly functional piece of architecture. There are two staircases (intended for ascending and descending), and sides left deliberately open. 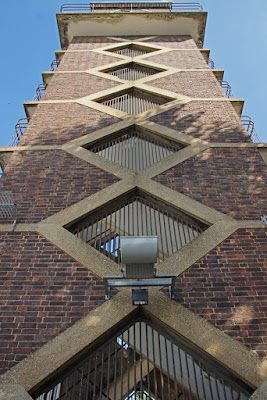 The Festival site was just the first phase of the Lansbury Estate, named for Poplar's Socialist councillor and MP George Lansbury who had died in 1940. In fact, it was not completed until 1982. Long before that, the low-rise housing of the first stage gave way to high-rise flats, while economic and social decline also blighted the estate in the latter decades of last century. 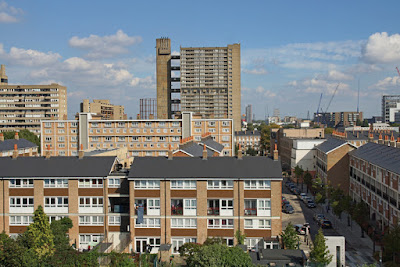 Just across the road from Chrisp Street Market is the most famous of these, albeit part of Brownfield Estate rather than Lansbury: the Balfron Tower. Designed by Erno Goldfinger, it is Grade II listed and currently being refurbished. Its story reflects many current issues with social housing, with residents being moved out and the flats due to be sold as private luxury homes.

I had been very excited about the Lansbury Estate in Poplar, specifically in relation to the 1951 Festival of Britain. The principal exhibition site might have been on the south bank of the Thames near Waterloo Station, but other exhibitions were spread out across the nation.

My late dad was demobilised in Dec 1945 and was fascinated by designs for family homes that were both affordable and spacious enough for a growing family. So the architecture exhibition in Poplar East London was right up his alley.

Yes, despite the relatively low visitor numbers, it does seem to have had an impact upon those interested in architecture. Some of the reactions were rather underwhelmed - although today, their disappointment perhaps seems unjustified.