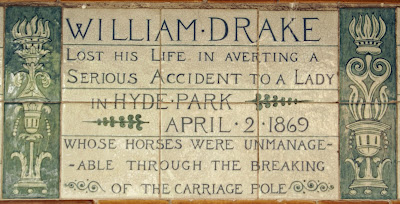 WILLIAM DRAKE LOST HIS LIFE IN AVERTING A SERIOUS ACCIDENT TO A LADY IN HYDE PARK, APRIL 2 1869, WHOSE HORSES WERE UNMANAGEABLE THROUGH THE BREAKING OF THE CARRIAGE POLE.
- October 11, 2015