London's Royal Docks have changed drastically since the size of container ships meant that cargo traffic moved to Tilbury. They finally closed to commercial traffic in 1981, leaving the area in decline. Further east and less well-connected than the Isle of Dogs, they didn't share in its breakneck transformation - but redevelopment has reshaped the area and is continuing. Royal Victoria Dock has new buildings such as the Crystal and ExCel Centre (not to mention one end of the lightly-used cable car); London City Airport sits between the Royal Albert and King George V Docks; the University of East London has a campus at Royal Albert Dock - and more developments are on the way. 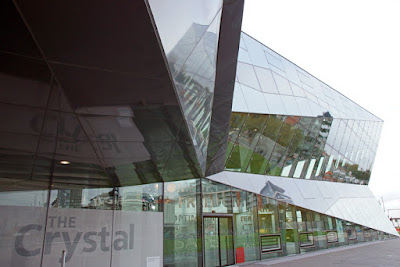 However, the Royal Docks Management Authority didn't want the area's history to be forgotten. They have therefore sought out the stories of those who lived and worked around the docks in their heyday, and the first phase of the Forgotten Stories project was launched at the Crystal on Friday. It includes 28 films highlighting different aspects of life in the Docks communities.

The contributors all have fascinating stories to tell - from the fun Stan Dyson had making his own gunpowder as a boy, to the hard working life of Patricia Holland's father who had to beg for work as a stevedore each day, and the tragedy of Johnny Ringwood's friends dying in a V2 rocket attack. The dock landscape may have altered almost beyond recognition, but these short films help to keep its past alive.