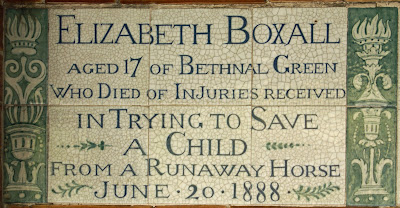 A history of Elizabeth Boxall's life after her attempted rescue can be reconstructed. She was kicked by the horse, and the injury did not heal but was further damaged by a fall. On the day of the fall, Boxall was taken to the London Hospital and cancer was found in the broken limb. An emergency amputation was performed, and for several months she seemed to be recovering but then the cancer recurred. A higher amputation of the limb was performed, following which Boxall was sent to Folkestone to convalesce. However, in June it became apparent that the cancer had spread to her lungs and she was sent home. The first the hospital heard of her death was the newspaper account of the inquest. Nixon was sceptical of whether a jury aware of the facts could have found that Boxall died from shock four months after the operation.
- November 01, 2015