Walk down Page Street, Pimlico, and it's hard to miss the striking buildings of the Grosvenor Estate. More surprising than their checkerboard facades is the architect responsible for them: Edward Lutyens. 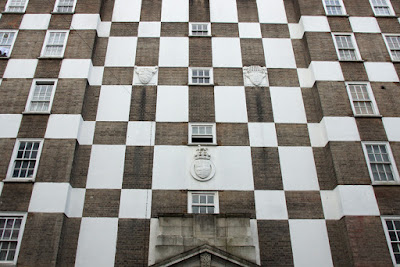 Best-known for his work on country houses and gardens, and City institutions, how did Lutyens come to be working on a social housing project? The answer is that the Duke of Westminster insisted: he donated the land for this development while Lutyens was his consulting architect on Grosvenor House. The new housing was built between 1929 and 1935. 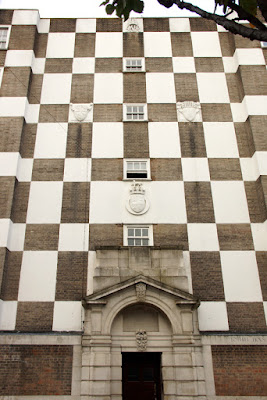 Beyond their distinctive end walls, the low-rise flats are arranged around three sides of a courtyard, with open galleries overlooking it. On the fourth, entrance side are small pavilions or gatehouses - like the decorative details on the main blocks, they are rather more classical in style (and thus typical of Lutyens) than the boldly geometric buildings themselves, with their contrasting Portland cement and grey brick. 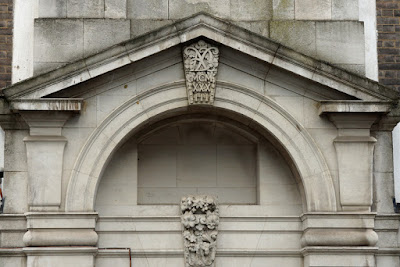 It was a different feature of these homes which drew attention in 1990. The Duke of Westminster's gift of land to Westminster Council, in return for a peppercorn rent, stipulated that the dwellings be "for the working classes". However, the Conservative council wanted to sell the leaseholds and in order to enable this, argued that the term "working class" no longer had meaning. The Duke challenged this view in court; the judge agreed that the term was not obsolete and the condition remained valid. The council's dubious approach to selling social housing later erupted into the "homes for votes" scandal.

Love this story! The Duke of Westminster was the real hero here. I take back everything less than flattering that I had thought about him! Not only did the Duke donated great land for this development, but he also hired the best architect to do the consulting work on Grosvenor House. At the very time of the Great Depression, 1929-35, the Duke could have used a cheap local architect, a cheap design and cheap materials.

He was certainly on the right side in this instance!