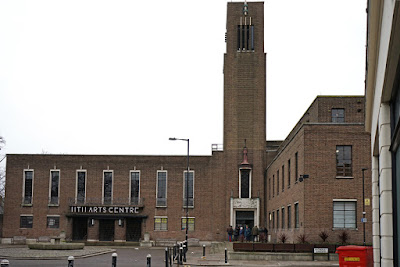 Hornsey Borough Council, eager to move from its original, outgrown home in Highgate, wanted to use land in Crouch End for its new town hall. (Bought in the 1920s, it had been set out as a public park.) However, the site was awkwardly-shaped, since the area was already built-up, and there was a lot to fit on it. In addition to the council chamber and offices, the council also wanted a large multi-purpose hall - and expenditure of no more than £100,000. Quite a challenge for the potential architect. 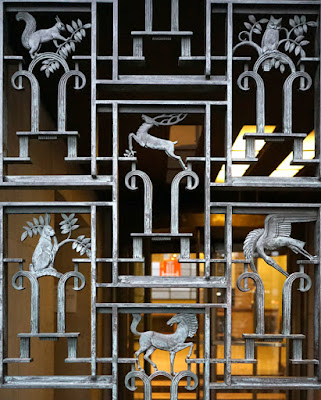 A competition was held in 1933, won by New Zealander Reginald Uren - a friend of Frank Pick and Charles Holden. In fact, he had accompanied them on their European trip which also inspired Holden's architecture for the Piccadilly Line. Indeed, in 1938 he and Holden would work together on the station at Rayner's Lane. 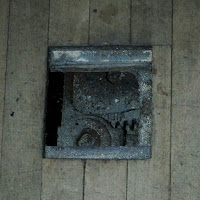 Uren completed this building in 1935, and the Town Hall was opened with great pomp on 4 November. The Duke of Kent attended; the Mayor was moved to tears; and there was top-quality entertainment for the guests. In the time it took them to tour the new rooms, the sprung floor of the main hall could be raised for dancing, using a mechanism still visible today. 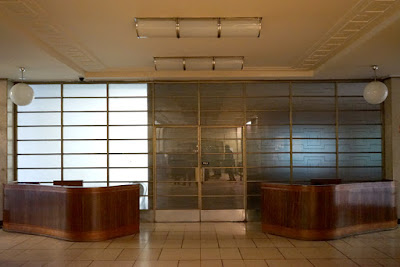 Although some disliked the new building, it also attracted much admiration and Uren won the RIBA London Architecture Medal for it. 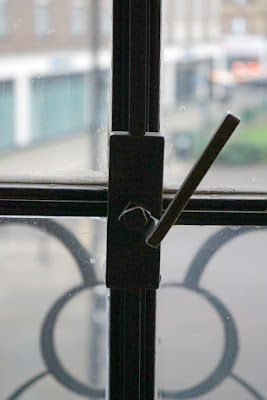 Uren's first major British commission, the building bears his influence on all its details - right down to specially-designed window handles. Sinuous lines and geometric patterns repeat and complement each other, in the wood panelling, metalwork, glass panels, and floors. The design in the floor of the hall lobby is not purely decorative, but marks out a queuing system! 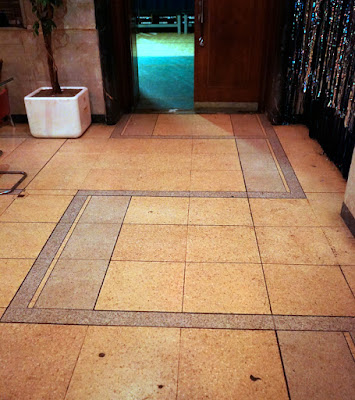 Such elegant practicality pervades the building, with natural lighting throughout and features such as a large committee room which can be subdivided into three smaller ones using sliding panels. And each sub-divided room still has its own clock; indeed, there are plenty of them throughout the building, and all were controlled centrally. 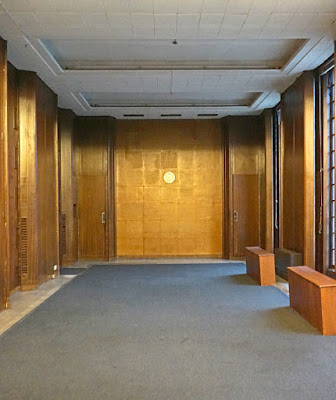 The tower is not purely decorative, but holds electrical equipment for the building. However, during construction, locals worried that a factory was being built! 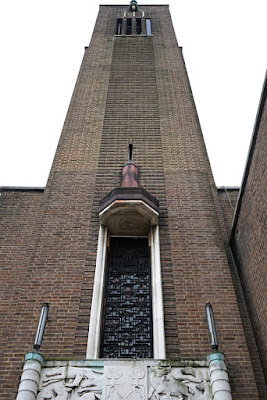 Inside the council chamber, a sloped back wall acts as a sounding board. The curving table surface in front of the seating holds individual drawers. 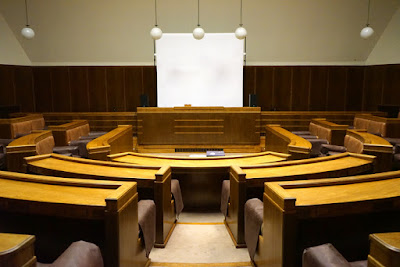 Such attention to councillors' convenience is even more apparent in the Mayor's office. It had its own bathroom (a feature absent from many people's homes at the time) as well as its own fireplace. 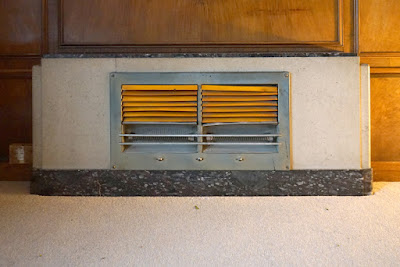 In 1963, Hornsey became part of the new borough of Haringey, with a town hall in Wood Green. The former Hornsey Town Hall was demoted to an office building, and eventually ceased its municipal functions. The condition of the fabric has suffered; the effects of a flat roof and blocked gutters are painfully visible in the main hall. A fault-line is developing where the two parts of the building, the administrative and entertainment areas, meet. 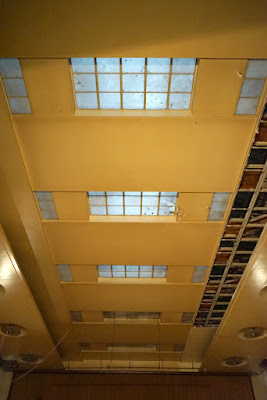 The future of the building, now Grade II* listed, is not assured. It is currently the HTH Arts Centre, as well as a popular filming location (you may have seen its interior on Eastenders). Let us hope that it can achieve the stability, care and restoration it now needs. 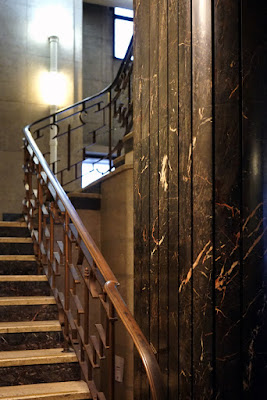 There is one more tour scheduled, for 2pm on Sunday 17 January. Click here to book tickets. 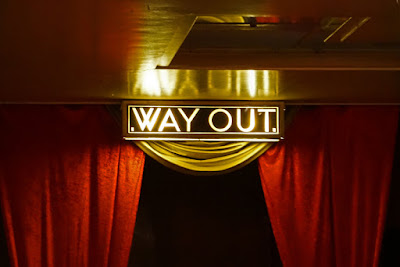 There are some interesting similarities with the Stadshuset in Stockholm - wonder if that was a stop on their European tour?

I cannot believe that I had never heard of Frank Pick (Vice Chairman of the London Passenger Transport Board) until this morning, and now I see his name again in your post. Reginald Uren might have been talented but he was a bit of an outsider. Thus being a friend and travel companion of Frank Pick and Charles Holden (major architect for London Underground) was valuable. It isn't always what you know; it may be _who_ you know!

I will be citing Frank Pick in January's History Carnival, being published on the 1/2/2016 in Art and Architecture, mainly.

I went to school with a boy named Uren - 6 months into the year the Headmaster announced that his Dad had changed his surname to Wren, because everyone was taking the ... er ... mickey out of him!

Interesting piece from a great site - I'm a new convert. The tower reminds me of the Salvation Army building in Denmark Hill near to my home.

Hels, you'll probably keep noticing his name now! Yes, the connection seems to have been a help to Uren. Ewan, you're right: they did go to Stockholm, and the Stadshuset was apparently much admired.

Hugh, I wonder if he was a relative??

I knew a man called Malcolm Wren, who used to work for London Transport, who had supposedly changed his name from Uren on marriage at his wife's request.