The efforts of one Mrs Yarman (her name was in fact Mary Jarman) were astonishing, if ultimately doomed. When she and her husband awoke to find their house on fire at two in the morning, they managed to get downstairs through the flames. However, as soon as Mrs Jarman remembered that her 77-year-old mother (or mother-in-law) was still sleeping upstairs, she was determined to save her. She crawled through thick smoke up the stairs, but her husband pulled her back halfway. He then rushed out for help, and as soon as he was gone she made two more attempts. The second time, her husband found her and had to drop her unconscious body to safety through a window before jumping himself. Three days later, she died from her burns; the old lady also died in the fire. It is perhaps particularly sad that although her husband's name and occupation are recorded on the plaque, her own are not.


MRS YARMAN, WIFE OF GEORGE YARMAN LABOURER AT BERMONDSEY, REFUSING TO BE DETERRED FROM MAKING THREE ATTEMPTS TO CLIMB A BURNING STAIRCASE TO SAVE HER AGED MOTHER DIED OF THE EFFECTS MARCH 26 1900

George Frederick Simonds showed similar bravery although his rescue attempt and death were swifter. He was a general dealer in Prebend Street, Islington (and, John Price points out, actually called Frederick George Simons) and friends with Mrs Corke, an elderly widow who lived nearby. When he saw that her house was on fire, he immediately rushed in to save her but became overwhelmed by smoke. He did make an attempt to escape from the staircase window but missed his footing and fell eighteen feet into the yard below. Meanwhile, Mrs Corke had escaped from the back of the house. 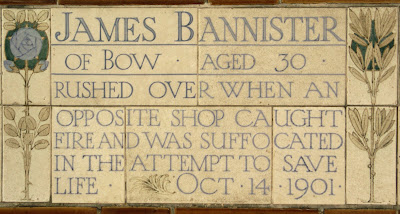 James Bannister rushed into a burning draper's shop in Bow to rescue a shop assistant overcome by smoke. The business was a large one, spreading over three buildings but with only one exit, and the conflagration correspondingly impressive. Bannister was a labourer at the auction rooms opposite, and rushed in to save people - but was later found dead, overcome by fumes, a few feet from the similarly-overcome body of window-dresser Henry Ludlow. 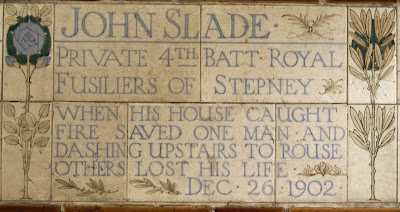