Shaped to fit the corner of a building (if not its drainpipe), a rather fine cast-iron sign complete with finials adorns a house in rural Brittany. It is absolutely crowded with information, some of which offers a glimpse back into the history of the French road system. 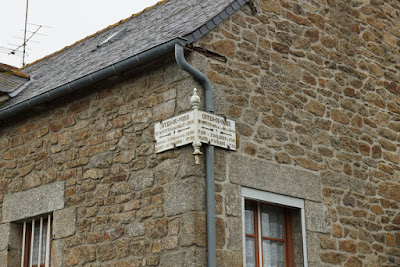 The first striking feature is its placement high on the wall. Signs were typically placed at a height of 2.5 metres to ensure that they could be read by coach-drivers. Convenient as that was, one hopes that travellers weren't going too fast when they encountered this: in contrast to modern signage, it is not designed to be read at a glance. 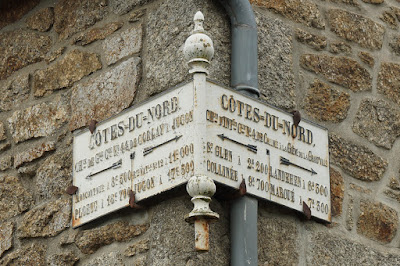 Each side not only offers information on destinations in two directions, but gives precise distances to each. We don't just have kilometres here, but metres, and a grammatically-correct phrase rather than simple name and figure. (And how much easier it would be to read 17,5km rather than 17k500.) There are serifs and superscript galore.

Before we even get to the key information, though, we have quite a lot of verbiage to get through. At the top is 'Cotes du Nord', the old name for the Cotes d'Armor department. (It was changed in 1990 to avoid confusion with another department, Nord.) This least-helpful information - a department is broadly equivalent to an English county, and this sign is not even close to its border - is nonetheless the largest and most prominent on the sign.

The destinations are local towns, but what is a 'way of common interest' or 'major communication way'? These date back to 1836: while major roads had been classified in 1811, byways had to wait another quarter-century. They were now divided into two categories, unclassified roads which were the responsibility of each commune (roughly, village) and classified roads which received funding from the department. The latter were in turn further divided into major communication ways and (less important) ways of common interest.

Later in the century, Napoleon III would promote the building and funding of these rural byways, recognising their importance for improving the countryside. He claimed that supporting them was 'the greatest service to render to agriculture'.

The 'way of common interest' and 'major communication way' would disappear in 1938, a little over a century after their creation. Both categories of classified byway became 'departmental roads'. Thus we have a latest possible date for our sign, but the style does suggest that it is somewhat older. In fact, most of these signs were erected decades or more earlier; by the late nineteenth century, enamelled plaques became the norm, often provided by Touring Club de France or Michelin.

If you want to see more, here are examples from other regions of France, and here's a history in French; here's another, rather different road sign in the same area. For now, though, let's recognise this small artefact as an attractive feature, a window into history, and a reminder of the importance of good graphic design.

Interesting. But where is this sign? Judging by the distances it should be somewhere near Trébry.
I suspect that the formality (and impracticality) of the sign is as more to do with Napoleonic systems of hierarchy and centralization than graphic design.

Looking at other examples, this really is particularly badly laid out! I can't remember its exact location, but will check and let you know.

These signs were fine around Landes where (I read somewhere) everyone walked around on stilts, otherwise you'd have to jump up and down to read them. I suspect that there is a secret Guild of Signmakers that competes among its members to produce the funniest prank: in England the wheeze seems to be to to show place names for a number of miles, and then suddenly cease at a crucial junction leaving travellers bemused and wandering.j