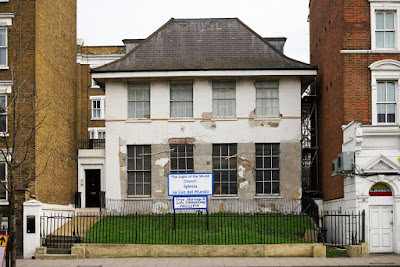 That must have been one, very talented family. But luckily for Michael Searles, modern fans can still examine his Paragon in Blackheath and his Georgian houses in Surrey Square!

I love semi circular crescent homes in any case, but the Paragon is particularly unusual. Instead of fully attached homes, these appear to be semi-detached houses with a lodge house thingy next to each.

Searles seems to have been one of the pioneers of semi-detached housing, according to this interesting discussion!

155 Old Kent Rd does look rather lost and in need of a bit of tlc. Very interesting discussion/oneupmanship. I am currently working in Coventry at the moment. I need to bring my camera as there are some interesting survivors from the past and of the rebuilding of the post-war city. Like many places large numbers of student blocks going up, the University is beginning to dominate parts of the city.

It's a real shame to see the state of Searles' house on Old Kent Road. If you look at Google Street View it was in immaculate condition less than 8 years ago. I recall seeing workers tearing plaster off the walls a few years ago, and it looks like they didn't get so far as to re-render it! So now it looks like it's been bombed. Southwark council should really do something about it - it's unbelievable that the current owners (Light of the World Church) have been able to get away with this, especially as it's such a visible landmark on Old Kent.

My wife and I walked past 155 Old Kent Road this morning, curious to see Michael Searles's house, only to find it wreathed in scaffolding and covers. It is clearly a major project of some sort of the Light of the World Church, whose notice board is prominent in the frontage. Our curiosity was stimulated by the fact that we live in a house designed and built by Searles, in Gloucester Circus, Greenwich.