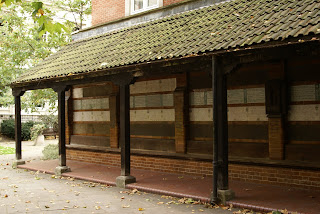 What the monument also tells us - with just one plaque - is that such heroism did not end in the 1920s but continues today. The actions of Leigh Pitt, who died in 2007, are recorded in the first and probably last new tile added since the 1920s.

Having read many of your posts on "Postman's Park" one is struck that in many cases people have lost their lives while attempting to save the lives of complete strangers with whom they have no connection.
As you say it does make you think as to whether in the same situation one would take the same risk. Having done a first aid at work course I remember one of the first things you are taught is that you should not endanger your own life in attempting to assist others. Sound advice in principle, but in the event of someone dying it would leave the thought as to whether one could or should have done more.

Yes, it's difficult to imagine how one would react in that situation. (As an aside, I remember that when I completed a first aid course many years ago, I spent the next few weeks half-hoping for an opportunity to show off my new skills! Luckily, no injuries happened near me, since those skills were somewhat limited.)