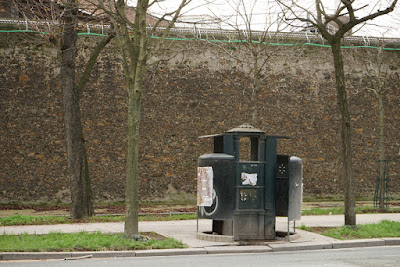 Rusty, poster-covered, on an unlovely section of Parisian road outside La Santé prison, this construction isn't much competition for Notre Dame or the Eiffel Tower! However, it does have its own interest: it's the city's last vespasienne urinal.

These public conveniences (albeit for the benefit of a male public only) really were named for the Roman emperor. Vespasian had been credited with introducing public toilets to Rome (and then imposed a urine tax!).  Public urinals have since been known as vespasiani in Italy, and the name travelled to France. 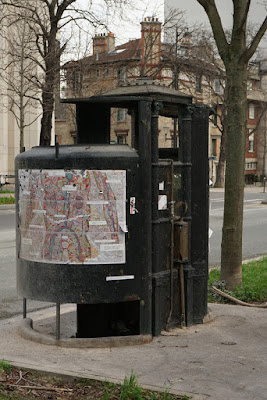 While public urination was forbidden in Paris, the lack of alternatives meant it was rife in practice. Police chief Antoine de Sartine introduced 'barrels of relief' in 1770, although it would be over sixty years before screened urinals were added to the city by its prefect, the comte de Rambuteau. His political opponents dubbed these 470 conveniences 'Rambuteau columns': he responded by calling them 'Vespasian columns'. The latter name stuck.

By the early twentieth century, there were more than a thousand urinals in Paris, but their days were numbered. In 1961, the municipal council voted for gradual removal of the vespasiennes and since 1980 their place has been taken by sanisettes, automated toilet cubicles which finally provide relief to all who need it.

There doesn't seem to be any information on why this sole example survived. Whatever the reason, it has taken on a historical interest its users in earlier decades would not have expected. And it's a rather good example, with some nice details in its cast iron panels. 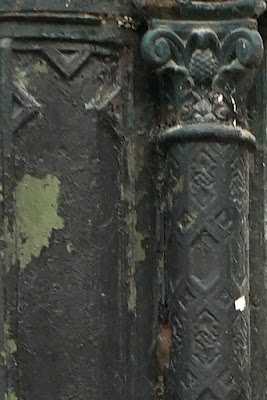 Vespasian's public conveniences charged for entry, and the money went to the emperor. His fastidious son Titus said, 'Father, how can you take money for these filthy smelly places?' Vespasian's response was 'Pecunia non olet' -- 'Money doesn't smell.'

What did women do, if they were caught short?

Cursed the sexism of the authorities! Beyond that, they presumably just had to rely on going into cafes or hurrying home. There were a lot of assumptions in the nineteenth century about women and public space...

Well of course there was a time when "Respectable" women would not be out in public places as these were largely seen as male domains. The introduction of department stores with cafes and toilets created safe spaces for women in public and allowed when more freedom outside the house.

I do recall reading many years ago a woman in the age of Crinolines relieving herself in a gutter by simply standing legs astride over the gutter. The whole business hidden by the Crinoline !