Dulwich is full of historical details, but here are a couple of letter Cs which may give you pause. 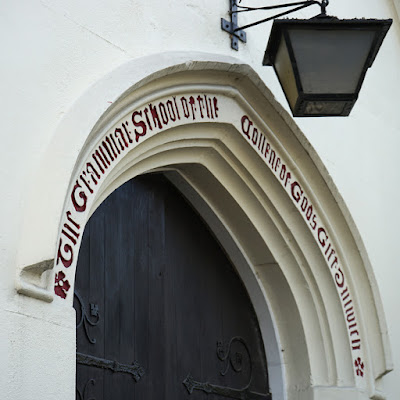 The first is on the former Grammar School of the College of God's Gift. A smaller building than the name might suggest, it was established in 1842 to educate 60 poor boys. This was paid for by the charitable foundation established by the eminent actor (and contemporary of Shakespeare) Edward Alleyne - also responsible for the rather grander Dulwich College. The grammar school building was designed by Sir Charles Barry, who is rather better known for the Houses of Parliament.

Since the Houses of Parliament and the remodelling of Trafalgar Square were both underway while the school was built, perhaps Barry didn't pay a great deal of attention to its execution. That might explain how a mistake went unnoticed in the lettering above the door: the capital C on 'College' and D of 'Dulwich' have been swapped and reversed! 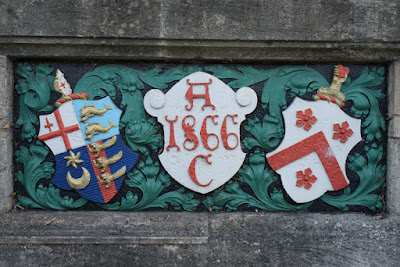 Several decades later, North Dulwich Station was built by the London, Brighton and South Coast Railway, with bridge attached; the architect was Barry's son, Charles Barry Jnr. On the bridge are fine plaques commemorating this, and it appears the C/D confusion has happened again. Shouldn't that be '1866 AD'?

In fact, it shouldn't. This time, the letters are quite correct as they stand not for anno domini but for Alleyn's College (Dulwich College), who owned the land.

That peculiar capital C with a vertical line on the right side, and the curly capital D, are normal for that style of lettering. The line on the C should be a thin hairline, but weathering and over-heavy repainting have thickened it and made it look a bit odd.

The C could make sense, but the D curls wrongly: it should be more like a Greek delta. Also, the letters are incised so it may be unfair to blame the painting!

Perhaps this was just the economy alphabet...

No, I've really seen that spiral capital D in other places. I would say that it is a Victorian thing rather than a genuinely medieval style.