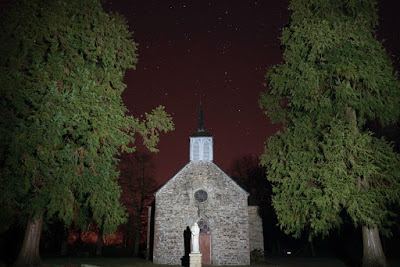 Small chapels are liberally scattered around Brittany; many villages have several. They are testament not only to the importance of faith in the region's history but also to the relative isolation of many small communities in the days before modern transport infrastructure. Many also incorporate pre-Christian beliefs about the healing powers of springs or stones: Brittany is thus famous for its abundance of healing saints, many not recognised by Rome.

The modest parish of Ereac in the Cotes d'Armor had 900 inhabitants at the end of the eighteenth century, and 1,500 at its peak in 1890. Nonetheless, it has two chapels - plus a third destroyed in the early nineteenth century and a fourth lost in the 1870s - in addition to its parish church. This one is the Chapelle des Rothouers, consecrated in 1858 and flanked by two Japanese cedars. It replaced an earlier one completed in 1768, which had stood a little to the south and fell into ruin following the French Revolution. (There may even have been an earlier one standing before that.)

The chapel used to have a statue, Our Lady of Rothouers, which has now been moved to the church. The statue in front of the door is a more recent work by a local artist. Francis Guinard was born in a nearby village and studied art in Rennes before moving to Paris in 1931; shortly after he returned to live in the area, his granite statue of Mary and child was placed here to mark the chapel's centenary in 1958.

The site also housed a miraculous fountain - these, too, are common in Brittany. It has largely dried up and disappeared, however.

It may not be especially historical or exciting in its own right, then, but the Chapelle des Rothouers tells an important story all the same. It is one of thousands such chapels which were a central part of Breton life and a link with its land and ancient past, and which remain a central part of its social and physical landscape today.


Very interesting, thank you. Old chapels conjure up so many memories, some real some in the imagination. There is no getting away from the importance of these chapels in the faith and the lives of the community.

Super. I love small Breton chapels too!
The name Rothouer also tells us a story. It tells us that this chapel has a late foundation:
rothouer/rotoué/rangoir is French. The earliest settlements might have used the Breton word: ogeri [Welsh: gog(e)ri], ‘a pool where flax or hemp is retted or soaked to soften it’. You find this in Troguery (Finistère).
Eréac is in linen country with Collinée, Uzel and Saint-Thélo not far away. The industry employed 35,000+ people in Côtes d'Armor at its peak in the 18thC. It's nice to know this cottage industry is remembered in its chapels.
http://quimper-vannes.blogspot.fr/

Thank you! And Geoff, thank you for the further information.