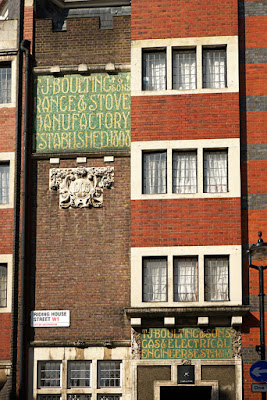 Almost a century after they were established, TJ Boulting & Sons adorned their new premises with richly-coloured, Art Nouveau signs. The elegant colours and flowing forms seem ill-matched to a business as prosaic as a 'range and stove manufactory', 'sanitary and hot water engineers', and 'gas & electrical engineers'. Ornamental Passions, in taking a look at ornamentation beyond the mosaics, suggests that this was the showroom rather than the manufactory. 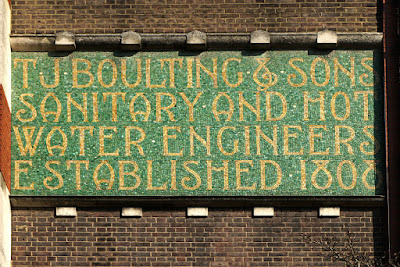 The signs date the firm's foundation to 1808; back then, it was known as 'John Boulting & Son' (John name of its founder and next two owners). Only in 1879 did it become TJ Boulting & Sons, when Thomas John - former partner of the third John - took it over. It seems that Thomas's son Percy was the driving force between these new premises; in his twenties when they were built, and possibly with some architectural training, he was eager to see them in the latest style. 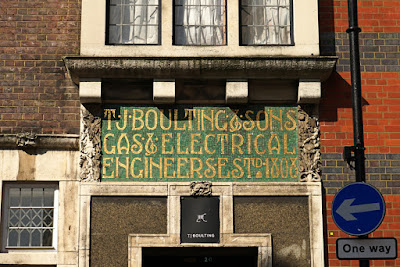 The building is the work of Herbert Fuller-Clark, also responsible for the Art Nouveau delight that is the Black Friar pub.The Boultings apparently occupied their premises until the 1960s. Today, the premises house an art and photography publisher, Trolley Books, and their gallery - which has, very nicely, kept the name TJ Boulting. 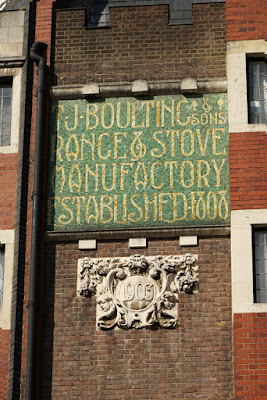 Very cool. If the firm was founded in 1808 and remained largely unchanged architecturally ever since, then yes it is surprising that daggy old gas and electrical engineers would want some elements of softness and turn-of-the-century modernity :)