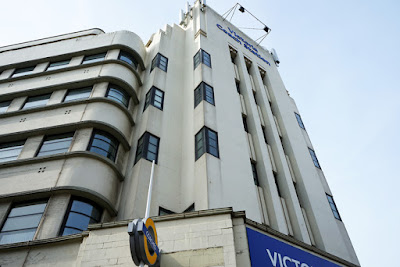 Eighty-five years and a day ago, on 10 March 1932, Victoria Coach Station was officially opened. The building was designed by Wallis, Gilbert and Partners, whose many other London buildings include the Hoover Factory. (The firm was led by Thomas Wallis; Gilbert seems to have been his invention rather than a real person!) Oscar Faber was the consulting engineer, a pioneer in the development of building with reinforced concrete as well as engineer on projects including the Bank of England and Houses of Parliament. 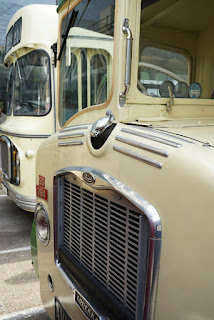 Although it's now part of TfL, the station was originally built by a consortium of coach operators under the name London Coastal Coaches Ltd. Long-distance coach travel had begun thirty years earlier, when the Vanguard Omnibus Co ran buses between London and Brighton - but they were too far in the vanguard, and ceased operations within a couple of years following a fatal crash in 1906. The industry really began to develop after the First World War, often using army surplus vehicles; better coaches with technical innovations like pneumatic tyres made coach travel a popular option in the 1920s. By the end of the decade, dedicated stations began to appear - London's first was at King's Cross, opened in 1929. London Coastal Coaches, who had been using a temporary yard, soon followed that example. They acquired the site and began work on the station in 1930.

Its Art Deco style has been recognised by Grade II listing. However, few traces of the past greet the traveller who steps inside. Sadly, the lounge bar and restaurant it boasted on its upper floors are long gone; modern signage and bland interiors dominate. This birthday weekend, though, is a little bit different: the station's history is being celebrated with a display of vintage coaches spanning the past eight decades.

Perfect timing. The historian can understand the years in which the industry took off, particularly in the presence of Art Deco architecture and decorative designs. But also because all the solders came back to civilian life after WW1 finally ended. It would have been very important to have found modern jobs for those young men and to have found more sophisticated and comfortable methods of transport.

But why were the dedicated stations destroyed or allowed to fall apart?