Gustave Eiffel was always keen for the Eiffel Tower to be more than simply a tourist attraction. Originally built for the Universal Exhibition of 1889, it survived demolition threats once the exhibition was over because it became a radio mast for the military. 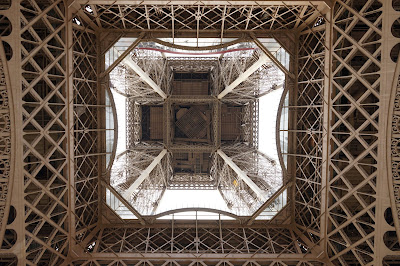 That wasn’t the only innovative use of the Paris landmark, however. Eiffel also installed a drop test machine to measure the drag and velocity of bodies dropped from the tower. As well as proving the concept of relative motion, this cutting-edge device was also invaluable for early aviators, as was the wind tunnel he built at the tower's base. 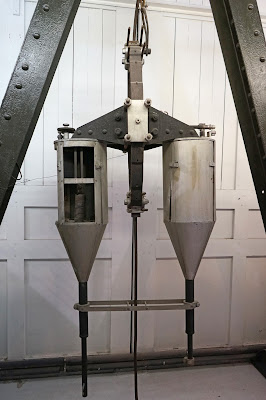 When Eiffel had to move his equipment from the Tower, he was encouraged by his aeronautical associates to set up a new laboratory in order to continue these tests. 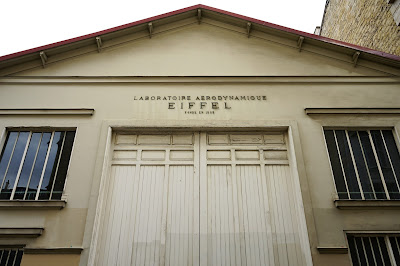 Opened in 1912 in Auteuil, the aerodynamic laboratory and its wind tunnel are still operating today – and as I discovered when I had the luck to visit, there are signs of its rich past throughout the building. 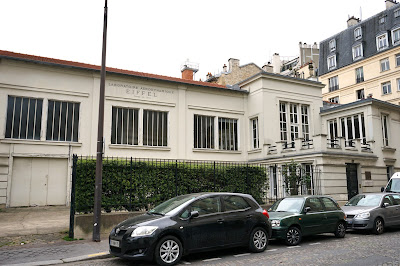 Unassuming premises in a quiet Paris street don’t give much of a clue as to the extraordinary machinery within. 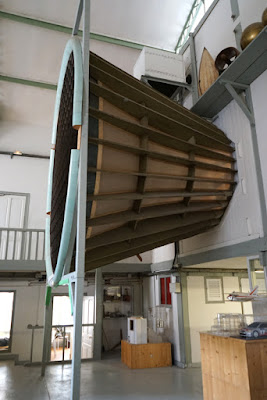 Most of the space is taken up by a wind tunnel which runs the length of the building. The intake is 4m in diameter, narrowing to 2m at the experiment chamber end. At the other side of the chamber is a 2m-long diffuser with 23-blade fan, which pulls air through the wind tunnel. 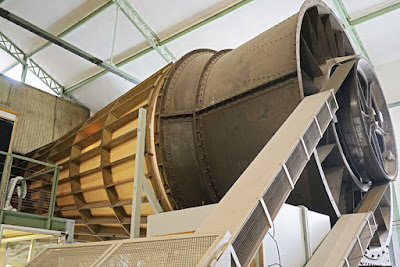 Although the original engines are still present, modern electric ones are now used to power the wind tunnel. However, the original equipment otherwise remains in use. 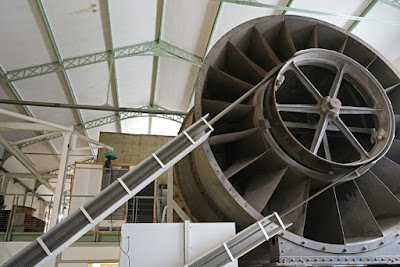 To answer an obvious question about such a facility in the middle of a residential area, it is surprisingly quiet. The neighbours are not disturbed. 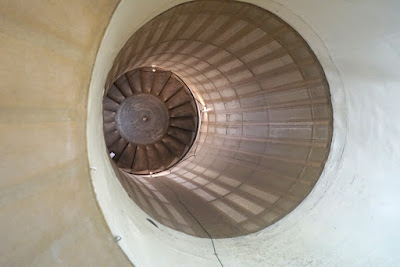 Marble-backed instrument panels are still in situ, although many have been superceded by modern technology. This is still very much a working lab, even if laptops have taken the place of paper records. 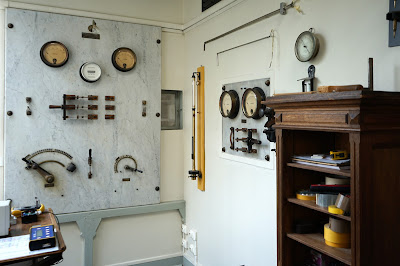 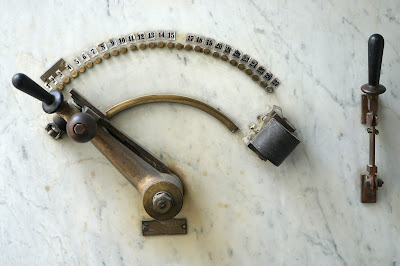 The laboratory is full of models used for aerodynamic testing throughout its history. They range from the propellors of early aeroplanes to modern buildings. There is a workshop on site, with a specialist model-maker. 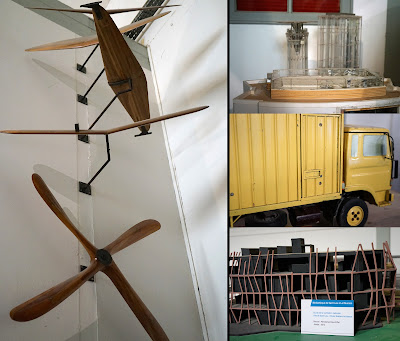 Other reminders of the building's long and special history include graphs and publications. They evidence Eiffel's wider interests too, which included meteorology. 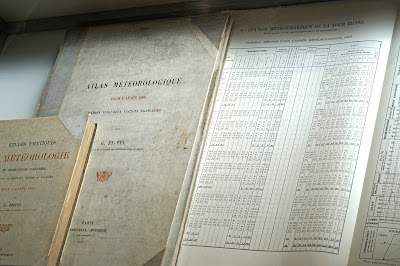 In his late seventies when the laboratory opened, Eiffel nonetheless took an active interest in its activities; his desk is still there today. By the time of his death in 1923, the wind tunnel had become a pattern for others throughout the world. 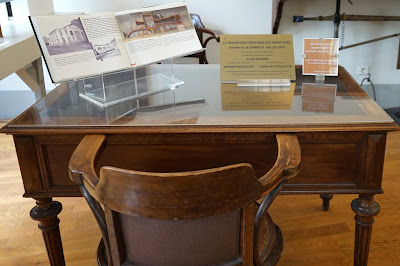 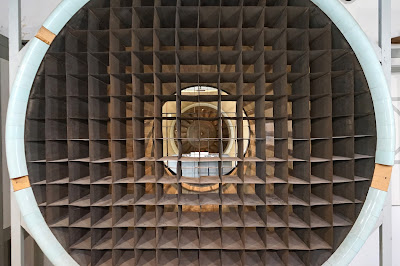 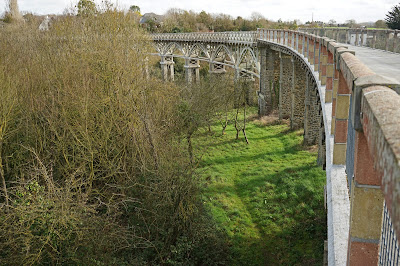 I'm quite a fan of Breton architect Louis Auguste Harel de La Noë, leading architect of the (now closed) Cotes du Nord railways. Born in Saint Brieuc, de la Noë studied in Paris before returning to Brittany as chief engineer of roads and bridges for the Côtes du Nord in 1901. He had already won awards for an x-shaped bridge in Le Mans (sadly destroyed in the Second World War) and for his pioneering work in reinforced concrete construction. He would now play a vital role in the building of the region's new local rail network, impressing with his light and elegant bridges.

For tourists, the railway was a way of accessing the beautiful Breton coast. For those who lived in the region, it was an essential way of moving around an area whose infrastructure was otherwise poor. However, the line faced growing financial losses and closed in 1948. Since then, other bridges have been demolished; thankfully, this one has been spared that fate. 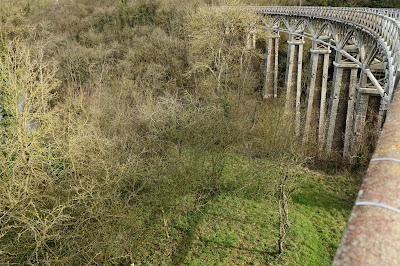 Over 237 metres long and 27.6 metres high, the Ponts-Neufs viaduct is an  impressive sight. The tall pillars and ornamented spans are more than visually appealing, though: constraints of time and budget called for technical innovations. Built in 1913, this was among the first reinforced concrete constructions. Building methods including prefabrication and standardised processes were also novel.

The joy of Harel de la Noë's work is that it is attractive and distinctive, going beyond the purely functional. Unfortunately, the pioneering nature of the technology he used brought its own problems. The sand used included salt; bubbles were not removed by vibration; and the steel was insufficiently protected.


Nonetheless, the bridge not only survived but continued to soar over its valley - and thanks to the hard work of the association devoted to promoting and preserving his work, it has recently been restored and brought back into use for pedestrians and cyclists. 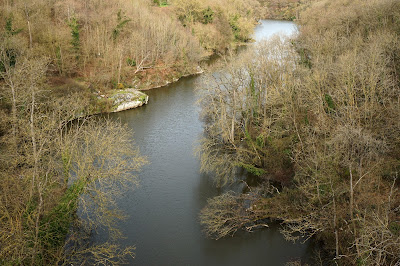 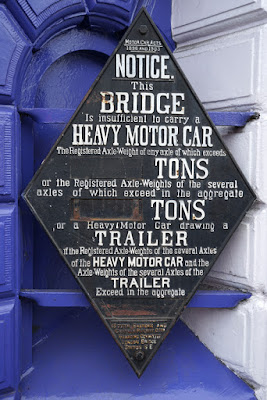 While the speed limit had been raised to fourteen miles per hour in 1896, drivers had to wait until the Motor Car Act 1903 for it to reach a dizzying twenty miles per hour. Less well-known is that the 1896 changes applied only to vehicles under three tons in weight, so that buses and lorries remained seriously restricted. The relaxation of that weight limit following the 1903 Act explains a now-defunct cast-iron sign still outside Blackheath Station.

'Heavy motor cars' were not what we think of as 'cars', but vehicles such as buses and lorries. The 1903 Act allowed the three-ton weight limit to be raised, and regulations followed in 1904 defining heavy motor cars as between two and five tons in weight (with a maximum laden weight of twelve tons).

Such relatively heavy vehicles could pose challenges, though, for infrastructure built with horse-drawn vehicles in mind. Thus the South Eastern and Chatham Railway erected this notice warning heavier automobiles not to use their bridge. Its effectiveness may have been limited by the rather complex information and varying fonts, even before the actual weights were erased!

Nonetheless, the changes had a real impact on public transport in London. In 1904, the city had 31 licensed motor omnibuses; the following year, there were 241, rising to 783 in 1906.

Other innovations of the 1903 Act are not unfamiliar to motorists today: reckless driving offences, car registration, and drivers' licences (but not driving tests: you just paid five shillings to the local council to get your licence). Archaic as it appears, then, the Blackheath sign symbolises the start of modern motoring.