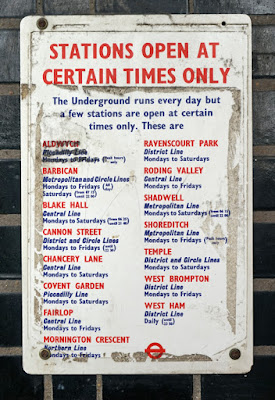 At Oakwood Station on the Piccadilly Line is a sign full of useful information ... if a little out-of-date. Blake Hall underground station reduced its hours to zero in 1981, while Aldwych is perhaps the city's most famous ghost station. It's not all bad news, though: many of these stations are now open seven days a week.

It is fair to say that Blake Hall may not have been much missed. It was located in Essex, and served as a goods yard until opening to Central Line passengers in 1966. However, few people lived nearby - even Blake Hall itself is a mile away - and the station became known as the Underground's least-used. Sunday services were withdrawn within six months of the station opening. Even weekdays were extraordinarily quiet, with 17 passengers a day by the time of closure. The station building is now a house; trains run through again - but do not stop - on the route of the Epping-Ongar Railway.

By contrast, Aldwych managed 600 passengers a day: quite a difference, but still very low for central London. It was a single-station spur off the Piccadilly Line, and a short walk from other stations; for some time, it had operated at peak hours only, as our sign advises. In the end, the cost of upgrading its lifts was too high to be justified by the number of users, and the station closed in 1994. It's now relatively frequently used for tours and filming; I haven't visited since its closure, but was one of the select few who used it occasionally when it was part of the Underground system!