When a Presbyterian congregation in Shrubland Road, E8 built their chapel in 1858, it is unlikely they thought it would still be standing today - for the building is a 'tin tabernacle' made of corrugated iron. Bought by mail order and shipped worldwide, such buildings were usually intended as a cheap and short-term way of accommodating people, typically while a more permanent structure was built. 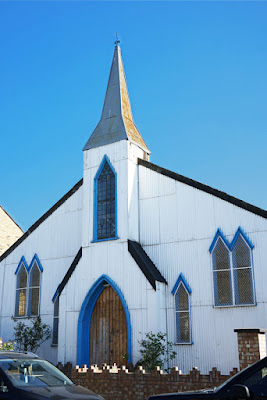 The Shrubland Road chapel is reputed to be the oldest in Britain. The popularity of tin tabernacles was just beginning - by 1890, William Morris was condemning them as 'spreading like a pestilence' - and given their nature, most have not survived. Like its more permanent counterparts, the chapel has gothic windows and even a small 'steeple'. The proportions feel a little odd: that's because the chapel is more or less square, and able to hold 500 people. 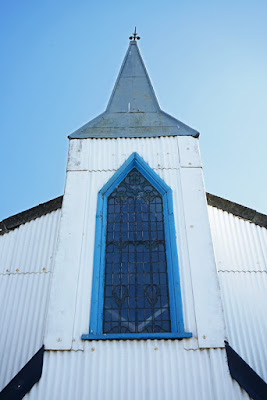 Although it was firmly closed when I visited, the listing details tell us that inside, there is a panelled lobby; wooden rafters and pews; a reading platform with carved pulpit; and organ. (You can also get a slightly wobbly glimpse inside on some YouTube videos of worship.) 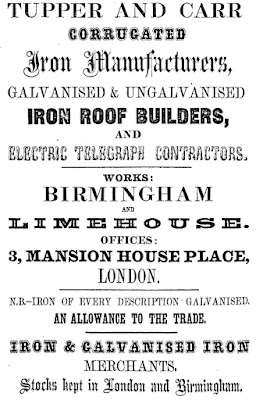 The manufacturers were Tupper & Co of Moorgate, London (their factories were in Limehouse and Birmingham). Other churches built that same year included one for export to Rangoon; under its former name Tupper & Carr, the company had also manufactured telegraph cable laid in the Mediterranean. Their move into buildings saw them advertise houses and sheds as well as churches. An 1862 advertisement published in New Zealand boasted that they could 'supply, properly packed for Shipment, with all necessary drawings and instructions for erection abroad, every description of Iron Roofing, Iron Sheds, Stores, Houses, Churches, &c.; these are temporarily erected at the Iron Roofing Works; in London, where they can be inspected prior to shipment.' Indeed, it went on, Tupper's were 'well known in the Australian, Cape, East and West Indian, and most Foreign Markets, as the best and cheapest.' 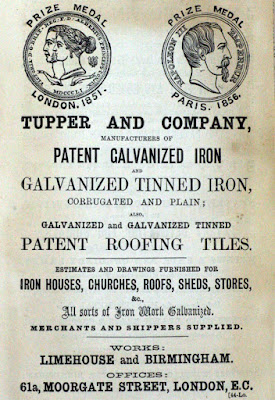 The Hackney chapel cost between £1,200 and £1,300: about £60,000 or so at today's values. (Four years later, Lurganboy in Ireland got their smaller, simpler chapel of ease for just £350.) That's a fairly substantial amount of money, but a lot less than a permanent building would cost. It's easy to understand the appeal of such construction to less affluent or established congregations. Even better, it apparently only took ten weeks to build.

This unassuming chapel is a significant piece of social history, then. However, the building's current position seems uncertain. Last year, it was reported that owners The Site of Eternal Life Church were selling it at auction for at least £1.7 million. (It had already been on the market for several years.) The pricing seemed optimistic, since it is Grade II listed and perhaps not the easiest type of building to convert into the suggested nursery or cinema; the chapel did not sell. A community use might be more appropriate, but less lucrative. It is currently on the Historic England 'At Risk' register, its status given as 'in need of some repair and discussions are ongoing with the owner.' Let's hope that the outcome for this rare survivor is positive.

I can understand that the Hackney chapel and other corrugated iron buildings were built that way because they were cheap, quickly built and were readily available to less affluent or established congregations. But they were boiling hot in summer, freezing cold in winter, very draughty and had poor acoustics.

In Australia squillions of corrugated iron Nissen Huts were built, initially during WW1 but specifically from 1939 on. They were given to recent migrants as interim accommodation, and to a lesser extent as churches, POW camp buildings and bomb stores. Cheap and fast, but not popular!

Nonetheless I agree that chapel should be protected with Grade II listing.

An interesting family, the Tuppers. Not just corrugated iron chapels, but plastic food containers seen on the table of no less a person than Her Majesty the Queen, and the copious and chokingly dull poetical works of Martin Farquhar Tupper (1810-1880), written in a rambling metre of his own devising. Four lines is as much as most folk can stand:

If the mind is wearied by study, or the body worn with sickness,
It is well to lie fallow for a while, in the vacancy of sheer amusement ;
But when thou prosprest in health, and thine intellect can soar untired,
To seek uninstructive pleasure is to slumber on the couch of indolence.

I remember the "Tin Chapel" from my childhood in Dalston in the 50s and 60s.It was close to the bus depot, oh how the area has changed. Happy days x

Caroline are you familiar with the book "Tin Tabernacles" by Ian Smith which covers corrugated iron churches and chapels in Britain. It has a good back ground history of corrugated iron buildings and excellent photographs of surviving buildings from around the country. I highly recommend this book to anyone interested in this subject.

Shire Press also have a book on "Corrugated Iron Buildings" by Nick Thomson.