There is no shortage of museums in Paris - from the great national institutions to the smaller, quirkier collections. However, one type of museum is perhaps conspicuous by its absence. For unlike London, Paris does not have a transport museum.

It does, thankfully, have a collection, held by RATP (the city's public transport operator, not unfamiliar to Londoners since it also runs a number of our bus routes). The historical vehicles, signage, and assorted other objects are stored outside the city in Villeneuve-Saint-Georges. They are beautifully kept and displayed, but only visited by special arrangement (my tour was organised by the Seine-Saint-Denis tourist board, who have an excellent programme of events). 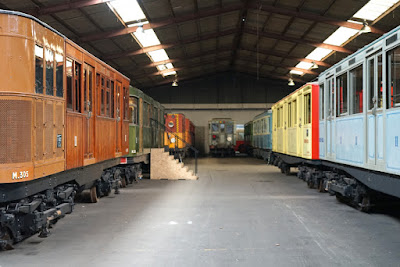 The station feels a long way from Paris: small and quiet, with few facilities. But a bus meets us here - a vintage vehicle from the collection itself. 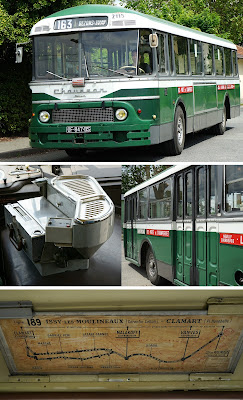 Our destination is an unremarkable warehouse - but there are treasures inside! We are guided through over  a century of public transport, beginning with the métro. It's younger than London's, so never ran on steam engines: the first underground trains ran in 1900. However, the modern, electrical railway suffered a disaster only a few years later, at Couronnes station in 1903. A short circuit caused a train to catch fire; the resulting smoke overwhelmed the evacuating passengers, and 83 lives were lost. 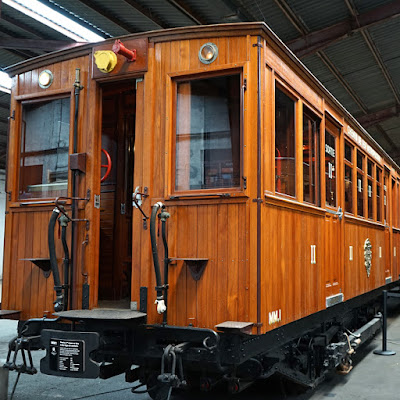 The consequent safety improvements are well-illustrated by the trains on display. A recreation of the original, all-wooden train also illustrates the luxurious first-class carriage interiors. (This is the only replica in the collection.) 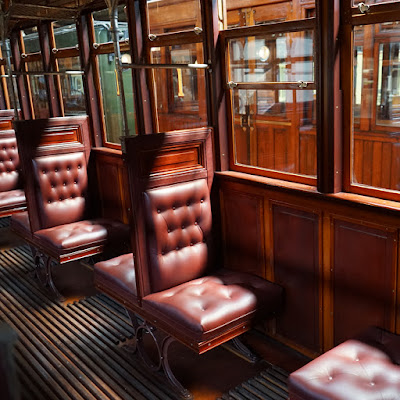 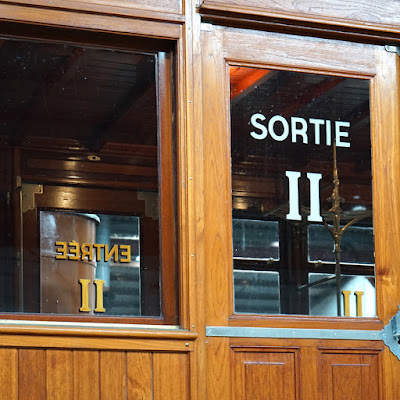 First and second classes were maintained in the next generation of trains. Their passenger accommodation was still made of wood, although they had been modified quickly after the Couronnes tragedy to have metal driver's cabs. 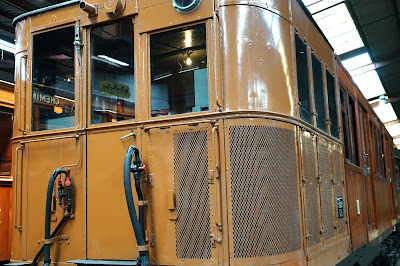 By 1908, the first fully-metal trains were introduced. 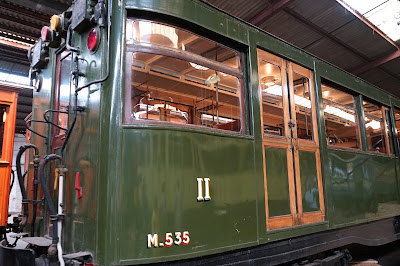 Metro trains continued to develop - as did their branding. Separate companies were united into the RATP in 1949, but the logo changes continued.

One famous Parisian innovation - whose prototype is here - is the use of pneumatic tyres. They brought better acceleration and braking, better passenger comfort ... and no more sounds of shrieking metal. However, the expense of converting tracks to accommodate them means they are used on only a minority of Parisian metro lines. 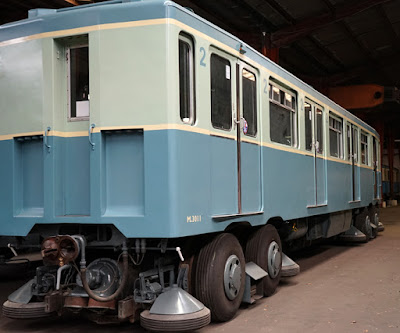 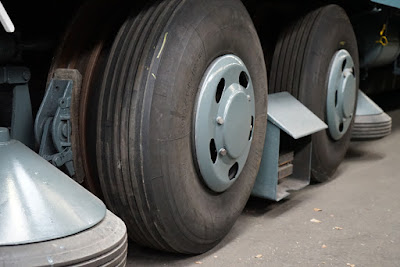 A second hall holds buses, most of which belong not to the RATP but to Sauvabus. The volunteers of this organisation keep many of the buses in working order - including the one that brought us here. 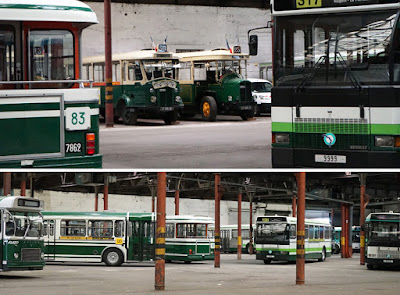 Another bus from the collection takes us back to the station. Travelling home in modern vehicles, one has a new appreciation for the history of this network - and for London's good fortune in having a dedicated museum in the heart of the city. 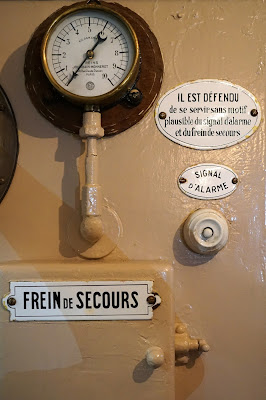 There is also a museum of urban transport just east of Paris, with a collection drawn from across France. The Musée des Transports Urbains has moved around in recent years, only opening on a few special occasions each year; but is now settled at Chelles, with monthly openings. Something for my next visit to the city! 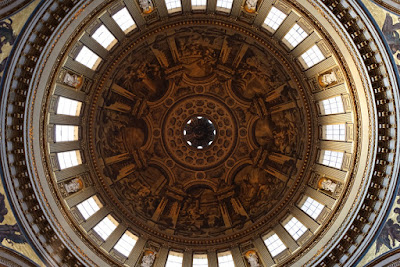 While its exterior is one of the most photographed in London, the interior of St Paul's is usually off-limits to cameras. It was a rare treat, then, to go into the cathedral and be positively encouraged to take pictures. 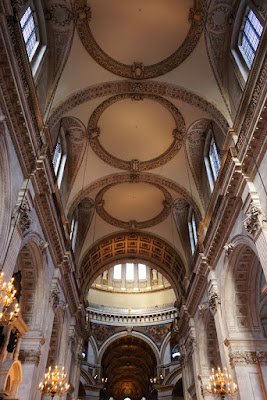 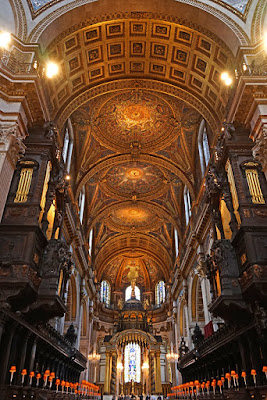 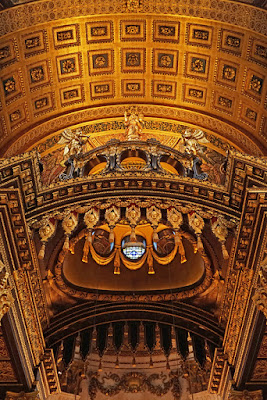 There is, of course, much that is shiny and spectacular. However, there are also plenty of smaller details to catch the eye. 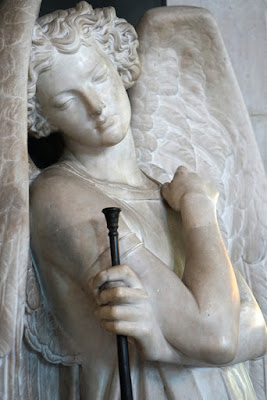 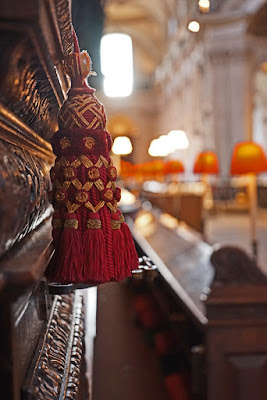 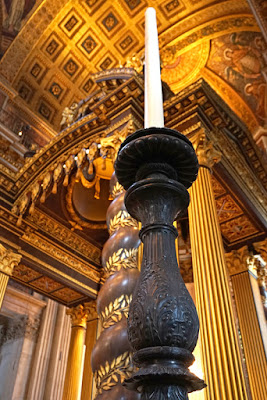 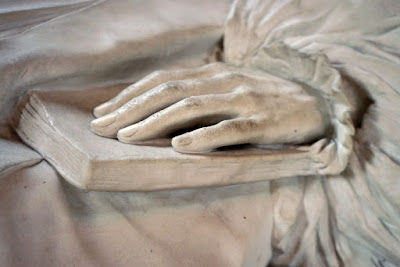 The special evening openings also offer non-photographers a chance to visit after work. However, camera bags were strongly in evidence when I visited! 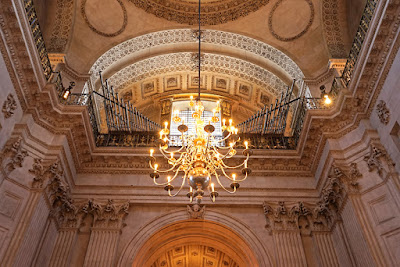 They continue on several more evenings throughout this month. Do note that these after-hours visits don't include the Whispering Gallery. 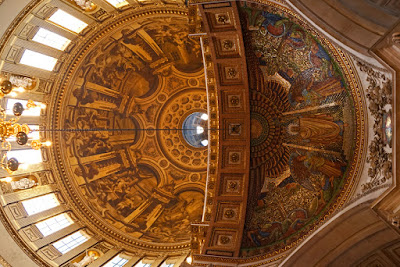 The Victoria Centre clock is a Nottingham landmark, and has been since its installation in 1973. A kinetic sculpture as much as a timepiece, its central bronze sunflower opens every fifteen minutes to reveal an animal orchestra.

The clock was created by Rowland Emett. A cartoonist for Punch, he also brought his ideas to three-dimensional life in a series of sculptures (or as he called them, 'Things'). Among his most celebrated work was the Far Tottering and Oyster Creek Branch Railway at the 1951 Festival of Britain.

There are few surviving examples of Emett's work on public display in Britain. That makes the Victoria Centre clock all the more important, but at some point it ceased to work. Thanks to the efforts of Pete Dexter, a local engineer, and the Rowland Emett Society, refurbishment was carried out and completed in 2015. The clock, or aqua horological tintinnabulator, is now delighting shoppers once more. 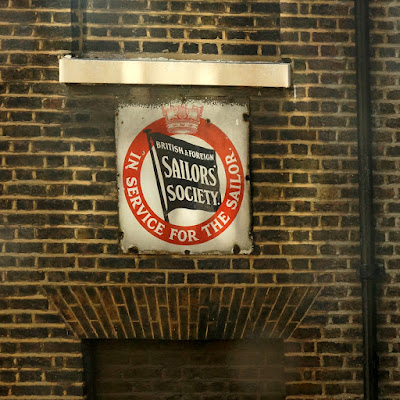 This sign caught my eye while I was exploring Limehouse Town Hall. The jaunty red and navy blue, highlighted by the late afternoon sun, draw the attention. They are a reminder that the building and its neighbour once belonged to the British and Foreign Sailors' Society, one of several properties in Limehouse.

These premises on Newell Street were a sea training establishment for boys, and apparently have a Victorian swimming pool in the basement. The Prince of Wales' Sea Training Hostel opened in 1920, the buildings having been adapted at a cost of almost £10,000. There were stringent requirements for admission on the six-month training programme. Boys between 14 1/2 and 16 years old, able to swim 100 yards, needed to provide medical and sight certificates along with excellent character references. Perhaps the easiest element to satisfy was height, with a requirement that the boy be over 5 feet 1 inch tall. Sailors' orphans had priority, and their fees were waived.

In 1940, the hostel moved to Norfolk and this building was requisitioned. However, its enamel sign remains, one more tangible link to Limehouse's maritime past. 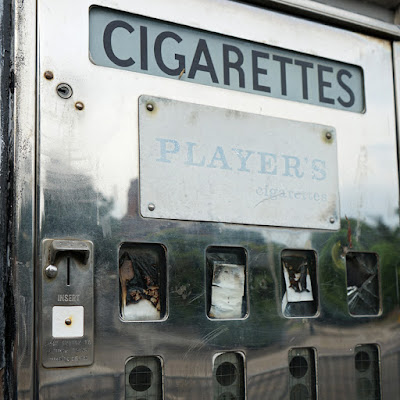 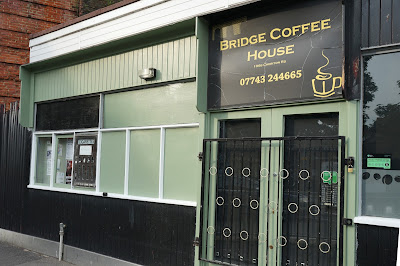 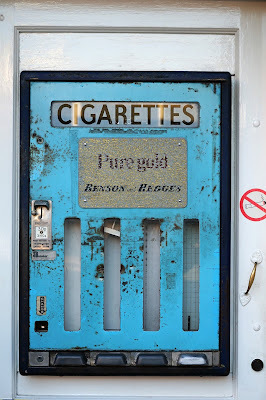 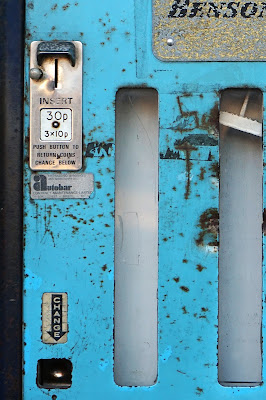