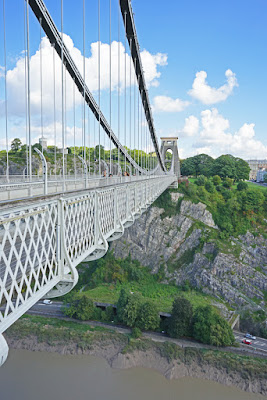 Bristol's most famous sight, the Clifton Suspension Bridge hangs over the Avon Gorge. Brunel's suspension bridge floats from cables supported by two towers. One is on a firm footing of rock, but the other required a brick abutment. 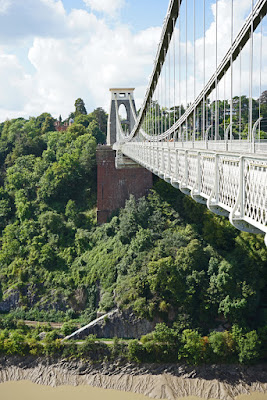 It was long assumed that the abutment was solid, and only in 2002 was it discovered to be a hollow construction with ten vaulted chambers on two levels. They were found almost by chance, when builder Ray Brown was replacing paving. He came across a hole, and on testing it with a rod, found it was very deep indeed! The first people to explore the vaults did so with no idea of what they would find; being lowered into dark spaces of unknown size and contents, then wriggling through tiny access tunnels to unknown spaces, sound a truly terrifying prospect! Luckily, visits are now possible in rather more congenial circumstances: last year, the vaults were opened to guided tours. It is now possible, for the first time since it was completed, to go inside the bridge. 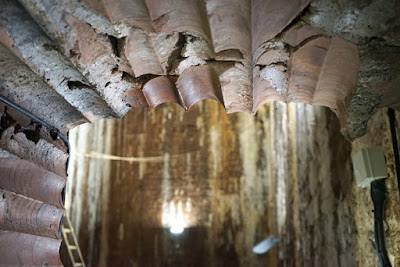 It may be less solid than originally thought, but the abutment is still a very sturdy construction. In order to allow access to its interior, a door had to be drilled through two-foot-thick walls. 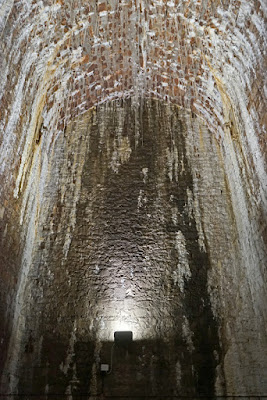 The interior, having been sealed, contained none of the smells and sights that we associate with abandoned buildings. No animals had lived inside, there were no ancient cobwebs, and no unpleasant odours. Protection of that environment is one of the reasons access remains restricted to a limited number of guided tours. 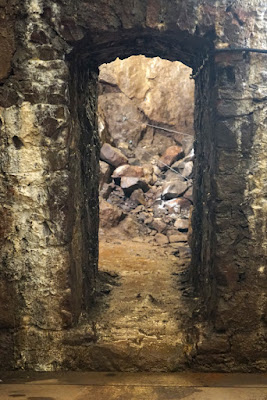 The vaults were not entirely empty, however. Knowing that they would soon be sealed, the builders had used the access point in the roadway above as a convenient hatch for depositing building waste. Victorian contractors were clearly not so different from today's! They unwittingly did the bridge a favour, though, by leaving a small supply of original stone which might be useful in future repairs. 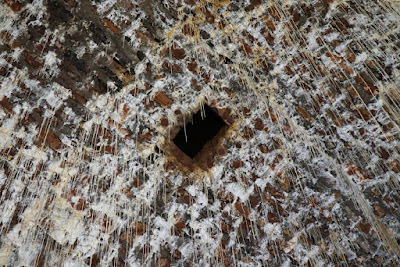 Two adornments are noticeable inside the otherwise-plain vaults. One is the masses of stalactites lining the roof. These form very quickly as water seeps through the lime mortar. However, they are fragile and break off before reaching any great size, only to be replaced by new ones. 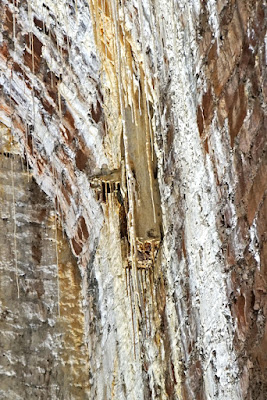 The other feature is the ties which line the walls. There was some concern that these show signs of decay, which might pose a significant issue. Surveys were reassuring: in fact, thanks to Victorian over-engineering, the ties were an unnecessary precaution and do not bear any weight at all. They can be left as they are quite safely. 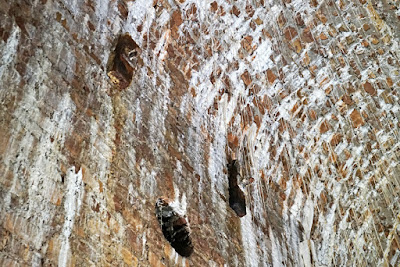 The holes in the walls are deliberate. Narrow, round passages lead into other vaults - so narrow, in fact, that they cannot be crawled through. Instead, the intrepid explorer must drag themselves through on their elbows. They also lead to steep drops and sharp corners. 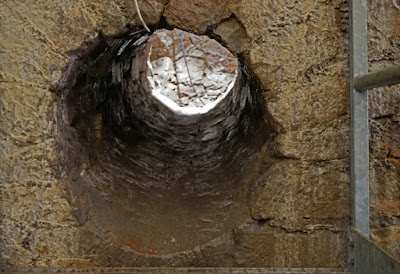 Scaffolding for surveys therefore posed something of a challenge. The solution was neat, in both sense of the word: a small, round hole was drilled through which scaffold poles could be passed. 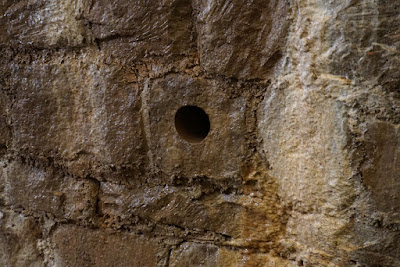 As in so many areas of life, the Victorians have proved less solid than they appear! 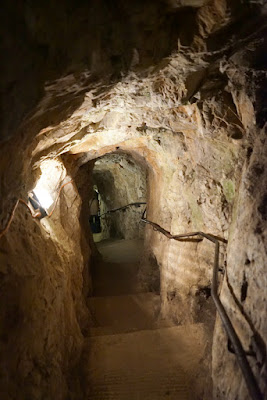 Similarly, the solid cliff on the other side of the Gorge is ... a little less solid than it appears. The Giant's Cave is visible, marked by its metal balcony, but impossibly high on the sheer rockface. That didn't deter the Victorians, of course, and the owner of the observatory at the top of the cliff built a 200-foot-long tunnel through the rock to the cave. This, too, is now accessible to the public although it's a tricky walk full of uneven stairs and irregular walls and ceiling: you have to be prepared to duck in places. 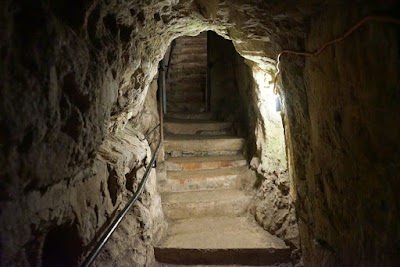 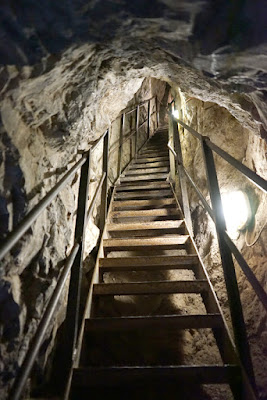 The cave itself is a relatively shallow, if high, space which hardly seems a spacious home for the giants who gave it its name. 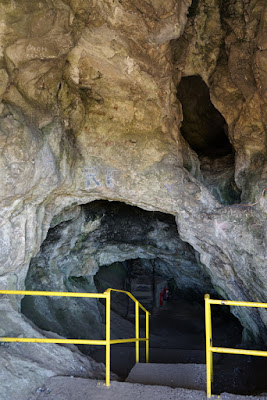 The tricky walk is rewarded, though, by the opportunity to stand suspended above the Gorge, feet supported by no more than a few metal bars, and get one of the best views of the bridge. 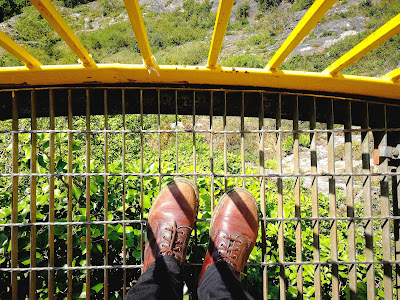 There is, of course, only one way to travel between these two underground spaces. The bridge still charges tolls to vehicles, but is free to pedestrians. It's an engineering marvel, a beautiful icon of the city, an incredible viewpoint - and a sharp contrast to the dark, mysterious spaces on either side. 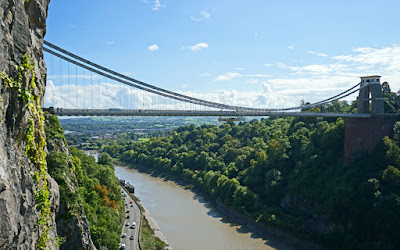 Clifton Suspension Bridge: while there are a limited number of vault tours, the regular guided tours of the bridge are excellent and free. There is also a lovely visitors' centre open 10-5 daily. A London Inheritance also did the vaults tour.

Giant's Cave: accessed via the Clifton Observatory, which also has a terrace cafe with panoramic vies and a camera obscura.

Fascinating. My memory of the bridge that it looked a long way down with the tide out.

It certainly does - and with the tide in, too!

Thanks for your comment on my post (alondoninheritance) about the tour of the abutment vaults. I was on the tour at 11 - it was fascinating.

I did not know about the Giant's Cave. I walked up to the observatory to take some photos of the bridge but completely missed the cave. I have looked back at my photos taken from the Leigh Wood's end of the bridge and I can now see the yellow railings around the edge of the cave - no idea why I did not notice this at the time, concentrating too much on the bridge.

Really interesting to read about this extra bit of Victorian ingenuity.

We were on the 12 noon tour! I only knew about the cave because I'd been sent a link about the cafe on the top of the Observatory, and looked up their website.