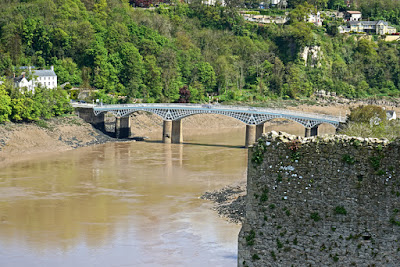 The Old Wye Bridge, Chepstow, is an elegant structure which also offers fine views of the town's castle. It is also a rather impressive piece of engineering history: the largest surviving iron arch bridge from the early nineteenth century. Soon, suspension bridges would be preferred for longer crossings: fifteen years after the Old Wye Bridge opened in 1816, construction began on one of the most famous examples of the newer technology, the Clifton Suspension Bridge. 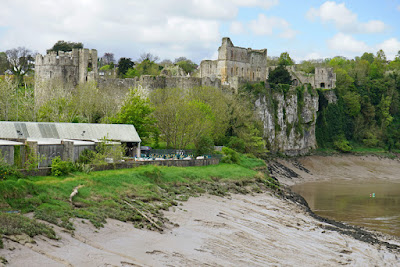 However, when the bridge was opened, it was a very modern replacement for its predecessor.  Cast iron was a new construction material, quite a contrast to the previous wooden bridge with its a few stone piers. Responsibility for its maintenance had been shared by the two counties at either end, Monmouthshire and Gloucestershire, since 1576. Neither seems to have discharged that responsibility with great enthusiasm: the bridge suffered everything from benign neglect to deliberate destruction (the latter by Royalist forces during the Civil War). A replacement was already being suggested in 1768, but smaller, poorer Monmouthshire was unwilling to pay an equal contribution to Gloucestershire. The plans fell into abeyance until 1810.

That year, the bridge was dangerously decayed, and John Rennie was commissioned to produce designs. Their cost led to further delay, but matters were brought to a head in 1812 when a ship hit and partially demolished the bridge. Six people died in the accident. At last, a new bridge was agreed - designed and built by Hazeldine, Rastrick and Co (better known for their work on early railway steam engines). Their bridge cost far less than the abandoned Rennie design, but the saving was not at the expense of style. Its five cast-iron arches on stone pillars are now Grade-I listed.

Its later life has not been untroubled. Traffic has changed enormously in quantity, size and weight since it was built, and strengthening was required in 1889 and 1979. However, a few years later a new road bridge took most of the traffic, and the bridge stands serene once more.

That is certainly a pretty bridge, and it is nice to know that the savings weren’t at the expense of style: but then you start to wonder, what did they sacrifice to make the savings?

Well, their savings got them an unusual and quite pretty bridge, but Rennie designed the very beautiful London Bridge and the Serpentine Bridge in Hyde Park, and he would have given them something equally fine. And they wouldn't have had to keep painting it.

Rennie had just built the first Waterloo Bridge, with its innovative low, wide arches and flat road - so I suspect one reason this was cheaper is that they weren't paying a premium for the star engineer of the day. Not to mention using less masonry - offset by the later maintenance costs, as Ralph points out.