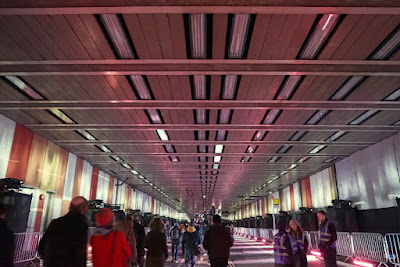 Beech Street tunnel is generally a rather uninspiring and polluted space, taking pedestrians and vehicles underneath the Barbican complex. Unless you're using the bus stop, you're unlikely to want to linger. However, for a couple of days, people were queuing to get in!

On 17 and 18 March, the tunnel was closed to traffic and became the venue for a sound and light installation, Tunnel Visions: Array. Sheltered from the snow falling outside - if not from the freezing temperatures - the audience experienced a half-hour show. Contemporary classical piece Karawane, by Esa-Pekka Salonen, played as banks of projectors played a digital artwork across the tunnel ceiling and walls. 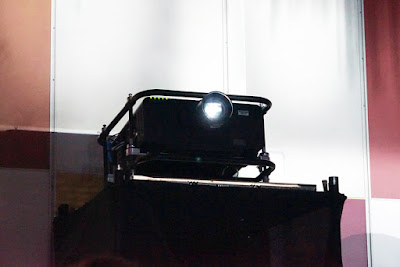 For the length of the performance, the space was 'animated' by art as the organisers intended. Unfortunately, it's not an effect which can survive the return of traffic; but for a few hours, the tunnel was truly transformed. 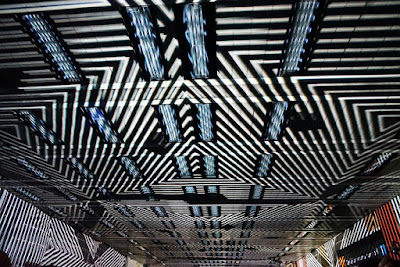 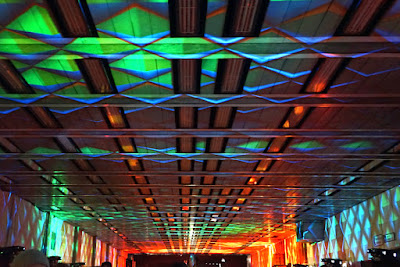 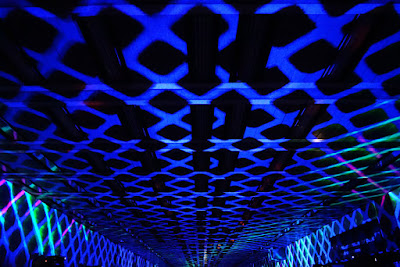 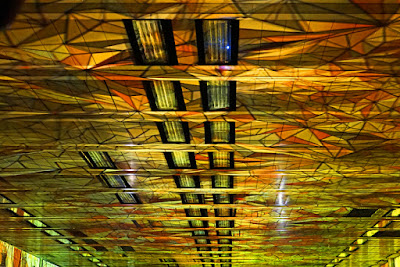 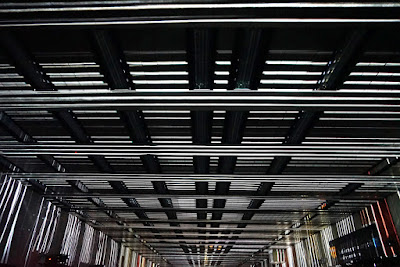 An exposed shop sign on Great Eastern Street, Shoreditch reads 'Acme Electric Co (Finsbury) Ltd'. It looks like a momentary exposure, while work is carried out, but similar photos were taken over a year ago so work must be progressing slowly. 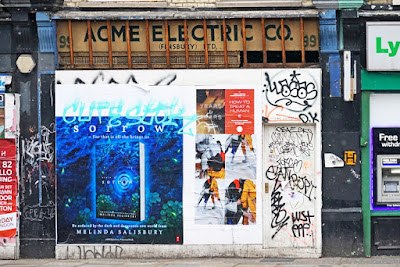 There is very little information online about this company, but they were the distributors for Ajax calculators and transistor radios, and a 1970 copy of Billboard's International Tape Directory lists them under audio tape 'playback equipment manufacturers and importers'. The company had been dissolved in 1968, but was incorporated again at the beginning of that year. It is unclear how long this second incarnation lasted, but it is now dissolved.

Like the shop, electric calculators and cassette recorders have largely disappeared from our everyday lives - but this sign offers, for now, a little reminder of that not-so-distant technological past. 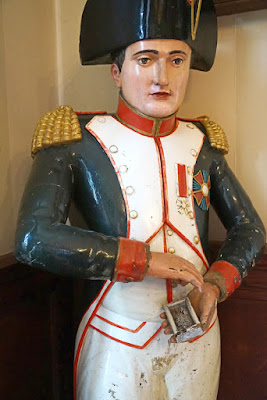 Think of Napoleon, and what other word comes to mind? It might be France, Emperor, or Waterloo - maybe 'short' since the myth of his small stature has proved remarkably persistent - but it probably won't be 'snuff'. Yet that was exactly the association a York tobacconist expected their customers to make. 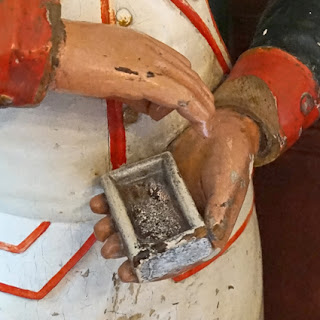 The wooden statue of Napoleon is now in the Merchant Adventurers' Hall in York, but for a century and a half he stood outside the premises of Mr Clarke in Bridge Street. He had been brought over from France in 1822, along with two other Napoleons who went to Leeds and London; neither are thought to have survived. Apparently, they cost £50 each - equivalent to several thousand pounds today - and he is carved from oak.

York's Napoleon had his own misadventures: during the Second World War, celebrating soldiers threw him in the River Ouse; and once, accidentally left out overnight, he was taken into police custody and had to be retrieved from the cells. In 1973, Napoleon moved to Judith Thorpe's shop in Lendal, York, where he was apparently particularly popular with French visitors. He stayed outside the shop until moving to the Hall in 1997.

But still, why Napoleon? The answer is that he was known for taking snuff. However, if his valet is to be believed, that reputation was somewhat overblown:

although he wasted a great quantity of it, he really used very little, as he took a pinch, held it to his nose simply to smell it, and let it fall immediately. It is true that the place where he had been was covered with it; but his handkerchiefs, irreproachable witnesses in such matters, were scarcely stained, and although they were white and of very fine linen, certainly bore no marks of a snuff-taker. Sometimes he simply passed his open snuff-box under his nose in order to breathe the odor of the tobacco it contained.

Nonetheless, it may have had a special resonance in York: one of the Yorkshire regiments, the Green Howards, hold a gold snuffbox given by Napoleon to Marechal Ney. The treasure, with its portrait of the Emperor on its lid, was seized from Ney's coach at Waterloo and became a prize exhibit in the regimental museum. Perhaps that helps explain why York kept its wooden figure long after London.

As for that statue of Napoleon in London, I haven't yet found where it was displayed. If anybody has information about it, please share it in the comments.