There's a ghost sign practically at the end of my road, and it has been obscured by a hoarding all the time I've lived here. They did change the hoarding once, but waited until I was on holiday to do it. Now, at last, it's been removed - who knows for how long? I first saw it after dark. 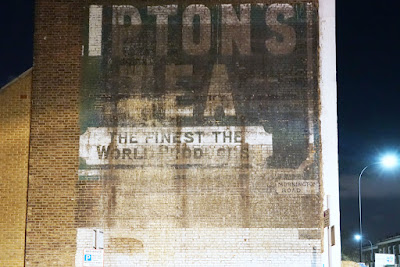 Happily, it was still exposed the following morning! Here, in all its glory (except for the lost strip on the left) is a painted advertisement for Lipton's Tea, 'the finest the world produces'. The date of the sign is unknown, but the slogan was certainly being used by Lipton's between 1901 and 1935. 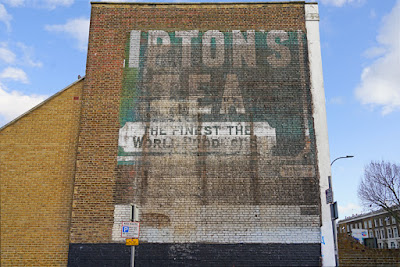 Greenwich no longer has a town hall: when the borough was merged with neighbouring Woolwich, the new authority took the latter's town hall as its base. However, Greenwich used to have one - and it's still standing, but now known as Meridian House. The building was admired by Pevsner and is deservedly  Grade II listed. 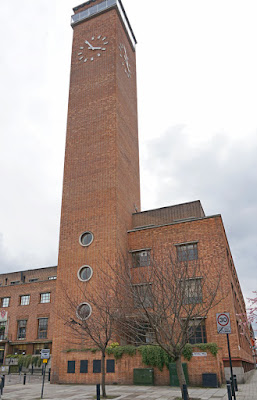 The tall, geometric design with its distinctive clock was built in 1939: a late example of Art Deco before World War II intervened. The architects, Culpin and Son, were heavily influenced by Hilversum Town Hall, built in 1930 by Dutch modernist architect Willem Marinus Dudok.

The partnership of Culpin and Bowers had been known for its public housing projects. When it was dissolved in 1935,  E G Culpin formed the new firm with his son Clifford. Culpin senior was an advocate of the garden city movement and a Labour councillor (later Chairman of London County Council). He and Clifford had just completed Poplar Town Hall the year before. Clifford took the leading role on the Greenwich project. 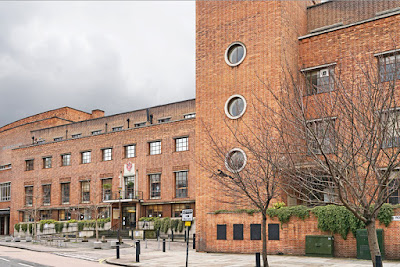 The brick is only cladding: the building is reinforced concrete. The glass near the top of the tower reminds us that it was intended as an observation deck with river views. Sadly, the public have not been allowed up there for some years. 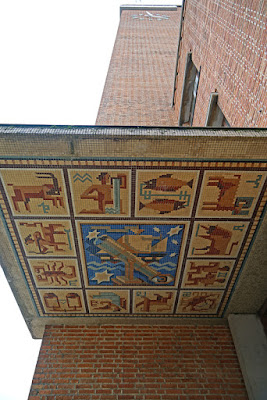 Happily, another feature remains accessible. The mosaic in the side entrance was created by Carter and Co, tilemakers in Poole, Dorset whose subsidiary Carter Stabler and Adams became Poole Pottery. Meanwhile, Carter and Co made both ornamental and functional tiles - including many of those lining London Underground, as well as the LCC and GLC's blue plaques.

The identity of the mosaic artist is not certain, but was probably David Evans who had worked with the Culpins on other projects including Poplar Town Hall. The work is a jaunty combination of the maritime - a ship and telescope - and celestial zodiac symbols. 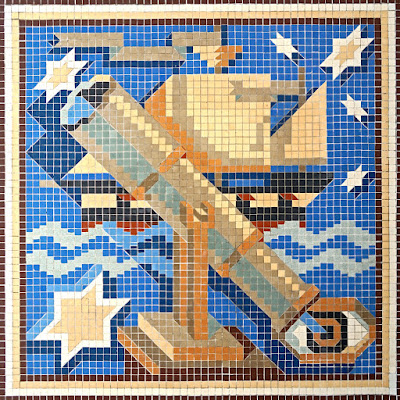 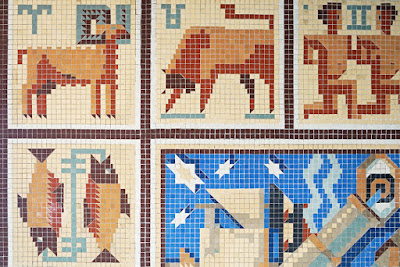 While no longer used by the council, much of the building is occupied by Greenwich School of Management and it remains a striking landmark. (The situation of its large public hall, Borough Hall, appears more uncertain as recent occupiers Greenwich Dance left earlier this year.)