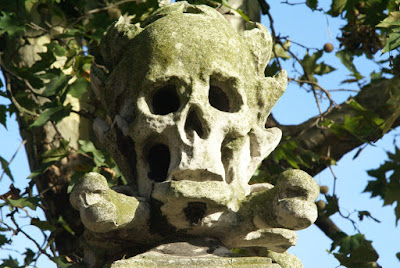 This skull and crossbones sits on the gatepost of St Nicholas’ Church, Deptford. You can see why, according to legend, the 'jolly roger' pirate flag was inspired by the church. However, the skull and crossbones wasn’t a new idea when it appeared in Deptford in the seventeenth century: even in London, a sculpted image was present in 1558, on the tomb of Henry VIII’s ex-wife Anne of Cleves. It was meant not to make people frightened for their lives but to remind them of their mortality and the need to prepare for the afterlife. 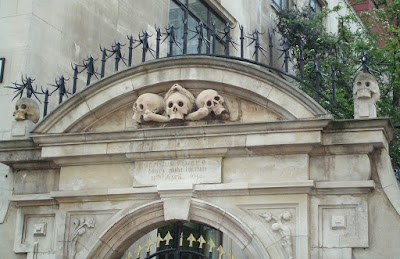 A similar use of skulls on a church entrance can be seen at St Olave’s in the City of London. Charles Dickens was inspired by this grisly gateway to rename the spot the ‘Churchyard of St Ghastly Grim’ in The Uncommercial Traveller:

The jolly roger may or may not have been copied from a Deptford churchyard, but it certainly was a design used by real pirates. The very first person known to fly a skull and crossbones was Emanuel Wynne, a French pirate who mainly operated in the Caribbean. His jolly roger was spotted in 1700. Other users included Edward England, an Irishman who worked on the African coast until his crew mutinied because he wasn’t bloodthirsty enough; Englishman Richard Worley who was captured in Jamestown harbour; and Henry Avery who mutineed against his captain and went on to take enough loot in one vicious journey to retire.