Think of power stations in London, and you probably think of the iconic Battersea towers; the reborn Bankside, now Tate Modern; maybe Lots Road or, if you focus on south-east London, Greenwich. However, there's a glaring omission from this list, perhaps because few traces of it remain.  I wrote this brief history of Deptford Power Station back in 2008; it would later develop into a page with vintage photographs. But why is it so interesting? 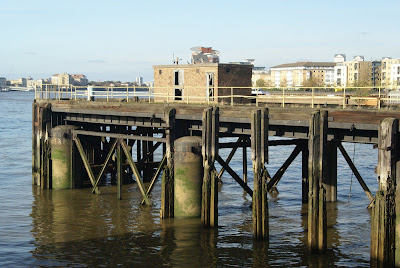 
The station was located on a three-acre site which had previously contained East India Company storage sheds. It was designed to house four 10,000-horsepower engines and 500-ton alternators, enough to supply 2 million lamps. Unfortunately, the planned Deptford Power Station was going to be too effective: during its construction, the Board of Trade decided to limit its area of supply and allow competitors, while technical problems meant delays which lost the company many customers. Its capacity was drastically scaled down when it opened in 1889; frustrated, Ferranti left the company in 1891.


The power station and its creator are now commemorated locally by the Ferranti Park, opened opposite the Laban Centre on 19 June 2004. The power station's jetty also remains, rotting quietly in the River Thames.