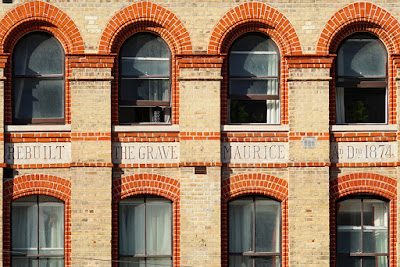 Engraved letters are all that mark a once-famous East End pub, the Grave Maurice. Established in 1723, it was - as the sign says - rebuilt in 1874. It was owned by Truman's brewery, which had large premises on Brick Lane - their chimney remains a local landmark. The strange name was apparently a corruption of Graf Maurits van Nassau (a sixteenth-century Prince of Orange). 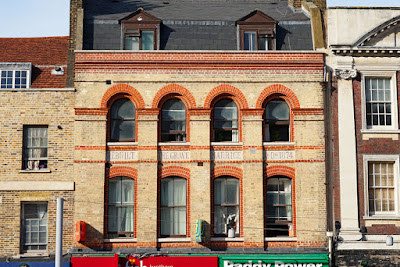 In the 1960s, the pub became notorious for having the Kray Twins as customers. It was later popular with doctors from the Royal London Hospital across the road. By the turn of the millennium, the pub changed management and was becoming run down - 'a gloomy and uninviting dive' according to the Evening Standard in 2001. It had a short time as 'Q Bar' before, in 2010, it closed. When I photographed it in late 2018, it had become a bookmakers' and pawnbroker.

Graf becomes 'grave' quite regularly in English versions of German titles. For example, there was a Margrave (Markgraf = 'Border Count') of Brandenburg and a Landgrave (Landgraf) of Thuringia, and there was also a title of Palgrave (Pfalzgraf = 'Count Palatine') originally given to the highest court officials of the Frankish kings and later to governors of provinces such as the Rheinpfalz (Rhineland Palatinate).