Two very diferent shop signs survive in Gravesend, neither ghost signs in the strict sense. Rather than being painted, one is tiled and the other a faint trace marked on the brick itself. 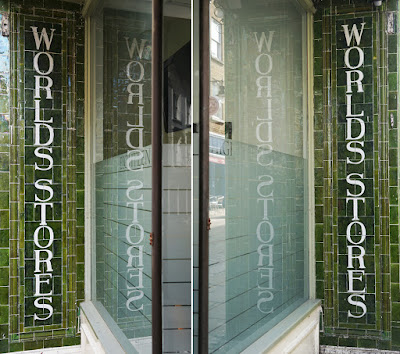 On the High Street, smart green-and-white tiling still marks where the Worlds Stores once traded. This chain of grocers with 'branches everywhere' survived into the 1960s, selling products from meat to sugar, but couldn't compete with the supermarkets. 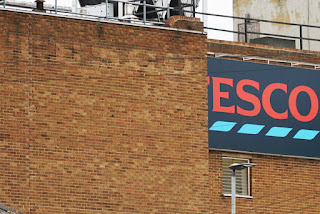 One of those supermarkets has had a change of branding - but the earlier lettering lives on as a shadow visible from the railway platforms. The shiny plastic signage of Tesco Metro stands alongside the remnants of 'Tesco' in an older style. This particular type was in use between 1970 and 1995, so it has proved persistent!

It reminds me of this Tesco shadow/label scar in Coventry. I couldn't find an exact date when the store stopped being a Tesco but the absolute latest was 1989. https://www.flickr.com/photos/10515323@N08/48809978187/in/photolist-2hnaTXJ-2hnaU14-2hhnR54-NM4gbL-JiWMJY-X5jcsJ-Kd3tvA-KHuFVL-ABng6K-vjKTCe-pkQuWS-oP5e3A-nYkFvb-ohAYFP-mww9hX-n4xWes-n43aLP-n43aer-n1cPjV