As a walled town surrounded by sea, St Malo made a tempting home for pirates. Since the sea is full of rocks and difficult for outsiders to navigate, it was better still. Their position improved even further when, like Britain's privateers, they became state-licensed: no longer pirates but corsairs. At a stroke, they were transformed from evil robbers at risk of being hanged to patriotic warriors harassing enemy shipping. Indeed, St Malo still describes itself as the 'corsaire city'. 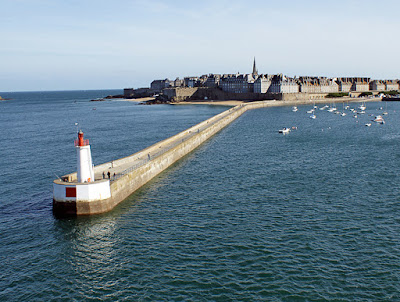 The crucial difference between a pirate and a corsair was that the latter had a letter from the King of France (although Brittany was independent, France found that these St Malo mercenaries were a valuable supplement to the French navy). It authorised them to act against enemy shipping during wartime, and should ensure that if captured they would be treated as prisoners of war rather than as pirates. They were mainly deployed against the English, especially during the Hundred Years War when they played an important role in disrupting trade through the English Channel. They later fell out of royal favour, but experienced a resurgence in the seventeenth century under Louis XIV. In 15 months from May 1702, St Malo's corsairs took 181 ships and 137 cannon; the town was known as the richest in Europe. Spoils were divided, with 10% going to the admiralty, 60% to the shipowner and 30% to the crew. This golden period saw two of St Malo's most famous corsairs: Duguay-Trouin and Robert Surcouf. Both have statues in the town today.

Duguay-Trouin was born in 1673 and his parents intended him to become a priest, but after a period of debauchery while studying in Caen he returned to St Malo and became a corsair - although he suffered from sea-sickness for the whole of his first voyage. However, he showed real flair for the work and soon became a captain - no easy job, since crews were always ready to revolt. After taking many English and Dutch ships, he sailed to Rio de Janeiro in 1711 with a small fleet of ships to capture the city from the Portuguese. He succeeded in doing so after a hard fight, and then, having released a number of French prisoners, sold the city back to Portugal for a hefty price - reputedly the greatest corsair victory of all time.

Surcouf's most famous victory was the taking of the Kent, an enormous ship belonging to the East India Company. His much smaller force overwhelmed the crew and 400 soldiers on board, killing the captain with a grenade. The prisoners were then taken by another ship to England, where they would be exchanged for French prisoners; meanwhile, Surcouf had to throw his cannons overboard to escape English pursuers and return safely to St Malo with the booty. However, unwilling to give half the gold on board to the government as required, he preferred to throw it into the sea.

Corsairs would enjoy a final resurgence during the Napoleonic wars, but were now widely seen as immoral. Under pressure from the English, they were abolished in 1854. Nonetheless, a corsair ship, the Renard, is sailing from St Malo once more - but only on pleasure trips!
- December 05, 2019