A 14th-century tower in the Paris suburbs

In the southeastern suburbs of Paris, Créteil is off the tourist track - but it does have a hidden treasure. The Colombier de Créteil is a dovecote which has survived here since the fourteenth century. It's the last trace of a noble estate owned by the Treasurer of France - the administrator of the royal finances. Today, it sits incongruously among modern high-rise housing. 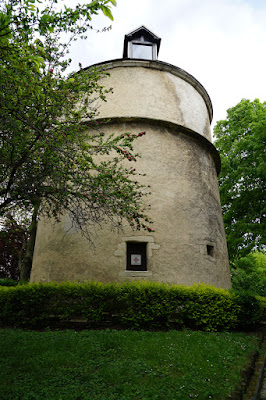 The fifteen-metre tower was built of local stone in about 1375. Such large pigeon lofts were a privilege of estate owners, and this one was certainly large. There is a downstairs room (now used to screen films of the dovecote's history to visitors); but the farmer would take a narrow flight of steps to the main loft. 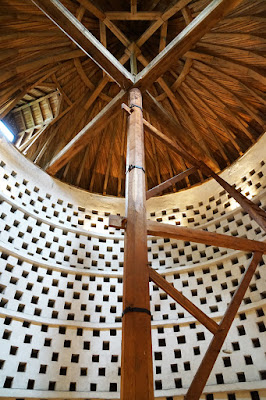 It held 1500 pairs of pigeons, each with their own boulin or niche. Its cleverly-made rotating ladder allowed access to their niches; the ladder could be turned from below and is cleverly angled to move freely within the curving walls. (The current woodwork and ladder were reconstructed, and the dovecot restored, with the help of plans drawn by Eugène Viollet-Le-Duc in the nineteenth century.) 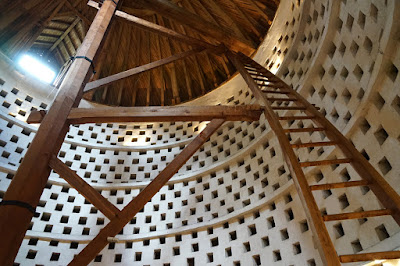 This might seem like a relatively humble, agricultural building but it was actually something of a status symbol. The building of colombiers was carefully controlled; they had to be in proportion to the amount of land held (since the pigeons would need food, and are fond of seed and grain). Large, freestanding structures such as this one were the privilege of seigneurial lords. Unsurprisingly, they were far less popular with nearby peasant farmers who found them a threat to newly-sown crops. 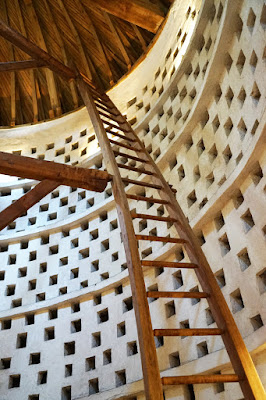 However, the most extraordinary thing about the colombier is not its size, its siginficance, or its ladder. This whole building moved 45 metres in 1972! The desire to preserve a historical monument, and the need to build housing and a swimming pool on its original site, came together in a brave project to move the structure from its original location. It was not dismanted and rebuilt but moved in its entirety - an ambitious, but thankfully successful, undertaking.


Le Colombier de Créteil is not generally open to the public, but occasional visits are arranged by Explore Paris and led by Les Amis de Creteil. 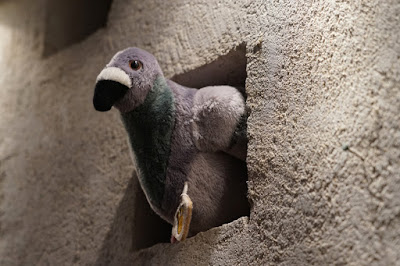 The dovecote, from the outside, looks very much like the martello towers and coastal forts around the world - similar shapes, building materials and interior spaces. I am assuming your building came first, by centuries in fact.

Bad news: when you do your next post you will discover that the old Blogger interface has been withdrawn and you have to use the horrible new one, which has more bugs than an elderly dog.

It doubles the number of spaces between paragraphs, so you should write your text without any spaces at all, and adjust them later.

Don't try to upload multiple pictures -- they've broken this ability and all pictures except the first are impossible to place accurately, and won't enlarge when clicked on. Instead, place the cursor where you want each picture to go and upload each one separately.

Inserting YouTube clips is OK, but the first thing you see is the most recent clips on your own channel, and if you want to search for one with its URL you have to click on a different tab.

Ugh! Thank you for the warning.

Very interesting post, thank you very much.
Don't be too dejected by the new Blogger set=up. I agree that change is difficult to adjust to
especially when it seems to be for the worse.
I expect and hope that you will soon adjust and make the best of it, and we will continue to enjoy your fascinating posts.
I hope that you are keeping well.
Best wishes.

Sorry to say that the insertion of YouTube clips seems to have gone wrong too in the new Blogger interface. They go in, and can be viewed on a computer but are now invisible on a mobile. Your video in this post is OK because it was inserted by the old system.

The only way I can make my videos work on a mobile is to use the embedding code provided by YouTube and paste this directly into the HTML text of the blog -- insert a dummy line like xxxxx in the text to mark the place, and replace the xxxxx with the embedding code. When you revert to the Compose window you will be told that your HTML code is wrong. Ignore this. Then you will find that the video comes out as a grey box in the Compose window. Ignore that too. It will show up OK in the Preview screen and when published. But what a palaver. I hate having to muck around with HTML code -- one slip and you're lost.