The Somerset town of Frome has some fantastic ghost signs. Probably the best are those collected on one corner building, 1 Bath Street, now an interior design shop. However, its earlier incarnations remain visible above ground level. 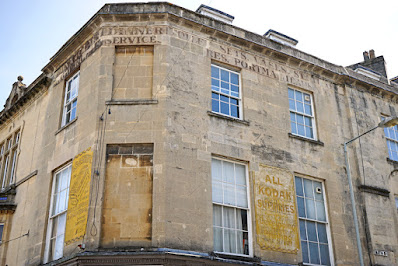 On the first floor are two signs advertising A S Ashby, supplier of Kodak films and services. One is a palimpsest: the text of the earlier signs read 'A S Ashby, Kodak Film developing & printing, rapid service'; over it was painted, 'All Kodak supplies - Developing Printing'. 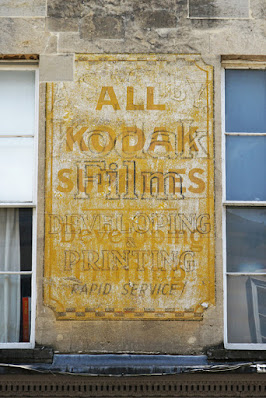 The other sign, on the other face of the building, features an image of a box of Verichrome film and a manicule, as well as the text 'A. S. Ashby for [Verichrome Kodak film] and expert developing and printing, entrance Bath Street'. The background is the distinctive Kodak yellow familiar to those of us who used Kodak back in pre-digital days, when 35mm film was everywhere. 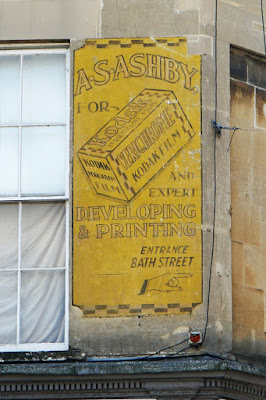 An online search shows that Ashby was publishing postcards of local views in the Edwardian and inter-war years. Many postcards - and his photographs of Frome Carnival queens - are available, but little information about the man or business. Kodak launched Verichrome in 1931, and it was only discontinued less than two decades ago.
However, the building has more than these two ghostsigns. Above the second floor is a strip of plain text, telling an even older story about this building. Spanning both sides and the corner, it reads, 'China & glass showrooms, dinner services, toilet sets, vases, statuary, [---res], portmanteaus'. The final word is intriguing, as a portmanteau is a piece of luggage typically made of leather, not china or glass! 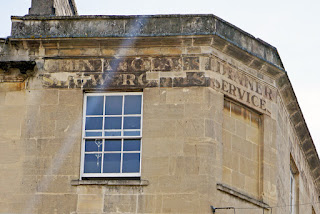 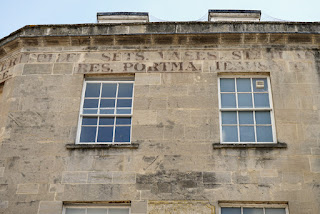 An interesting post, as usual, Caroline - but what do you mean: "back in the days of 35mm film"? I still use it, black & white, and make silver prints in my darkroom!

Fair point, Nicholas! I'll amend to what I meant - back in the days when everyone used 35mm film. (Which seem about 5 minutes ago - I've not yet recovered from an art exhibition where one photographer described the vintage process he used in detail, and I realised with dawning horror that this historical approach was in fact 35mm black-and-white processing and printing.)

It’s nice to see u back to posting. I love ur blog. Thx.

Thank you for another great post. I've long admired these signs – especially the Kodak ones as I don't recall seeing Kodak ghost signs anywhere else. There must have been people processing Kodak films everywhere, but maybe they didn't feel the need to advertise. Anyway, it's pleasing the signs have survived.