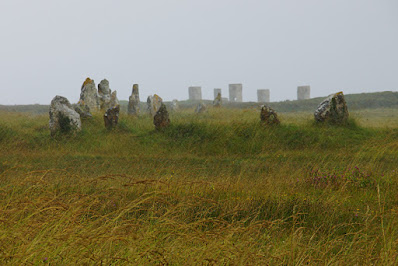 On the coast of the beautiful Crozon peninsula in Brittany, just behind the neolithic Lagatjar alignments, is a ruined manor house with distinctive cylindrical towers. It was once the home of poet St-Pol-Roux, until both the manor and his family were destroyed in one terrible evening.

Roux was born Paul-Pierre Roux in Marseille, in 1880. He moved to Paris where he wrote plays and became known as a member of the Symbolist movement, before leaving the city for Brittany. After the birth of his daughter Divine, the family moved to the manor house he built on the Crozon peninsula in 1905. It was initially called le Manoir du Boltous but when Roux's son died in the First World War, he changed the name in his memory to le Manoir de Coecilian.

However, their life here came to a terrible end in 1940, under the German occupation. On the night of 22 June, a drunken soldier burst in. When Roux tried to get him to leave, a struggle ensued: the soldier killed the family's maid Rose Bruteller; he also seriously injured Divine. While he would be punished, the German Army nonetheless comandeered the house and used it as a base throughout the war. It was bombed at the end of the occupation and remains in ruins today.

Meanwhile Roux, broken-hearted at the events of the night and the subsequent pillaging and burning of his writings, died within a few months. After the war, his daughter gave the property to the town and dedicated herself to preserving and promoting her father's work.

It is a sad story, indeed.

It seems, too, that Roux's writings have been largely overlooked, a fact earning him the epithet of "the forgotten poet".

How terrible that an act of stupid violence should not only destroy a family's lives but virtually wipe them from history.

Perhaps someone should revisit his works (some have been published, I believe) and make a reasessment of his work.