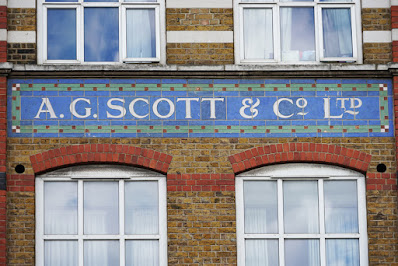 This Deptford sign is so bright and colourful that it is almost surprising to find the company A G Scott made something as prosaic as tin boxes! Their headed notepaper emphasised that they made plain tins and fuel cans as well as the decorative containers for products such as tea and biscuits. 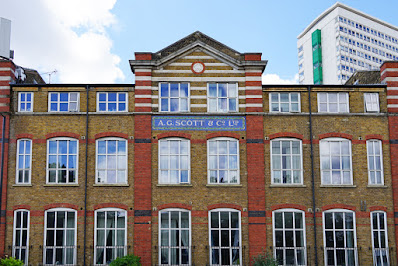 The bright colours also distract from a darker story. Tin box making was unpleasant, dangerous and poorly paid work done mostly by young women. They used power presses to stamp out the box shapes, and sometimes lost fingers to the machinery. The shapes then had to be soldered together - but were very sharp on their cut edges. The box would then be decorated, ready to be filled: a pretty product showing no trace of the poverty and injuries experienced by those producing it.

The company was established in 1890 and as they expanded, added this building - Scott House - in about 1906. Wage rates at A G Scott for 1911 survive. Pieceworkers made around 3d per hour - a little under £1 at today's values; many workers earned 5/6 a week - about £21 in current terms, and less than a skilled tradesman would have earned in a single day. The Trade Board Act 1909 allowed minimum wages to be set for 'sweated' trades: ie those with excessively long hours, poor pay, and insanitary working conditions. In response to the sweatshop conditions of many tin box factories, a minimum wage was imposed through the Tin Box Trade Board established in 1914.

Improvements in pay and conditions were hard-fought, with prominent trade unionist Mary Macarthur involved in the campaign for better working conditions in tin box factories. The 1914 Annual Report for the National Federation of Women Workers included details of strikes in Deptford. A.C. Scott's workers appealed to the Federation after going on strike for higher wages, and 'in less than a week considerable increases were obtained which included a minimum wage of 6/6 for girls of 14 and a minimum wage of 12/- to 15/- for women of 21' depending on their work. All the women at Scott's joined the Federation: some 600 of them. The neighbouring Lloyd's tin box factory soon followed their example, and Francis & Sons on Trundley Road were not far behind; later joined by Dyson's, who also made tin boxes. Unsurprisingly, this upsurge of trade union activism was described in the report as 'the Deptford uprising'.

Today, few traces remain of Deptford's tin box industry. Scott's moved out of the building in 1922 and it has since been a sack factory, laundry and, now, housing. This sign, then, is not just an attractive feature but a clue to the building's complex past.

Of course all the 600 women at Scott's joined the Federation; every thinking worker would have done the same. As did the neighbouring tin box factories ..where the workers had been underpaid, overworked and had their health endangered.

So I am outraged, even after all this time, that the upsurge of trade union activism was described as The Deptford Uprising. Capitalism meant exploitation, so trade unionism represented rebellion to the business owners.